ZTE has recently launched Blade A2 Plus in India for Rs 11,999. Now the company seems to be working on a new smartphone which is named as ZTE K813. The ZTEK813 has been spotted on a GeekBench benchmarking website. The listing on GeekBench revealed some key specifications of the ZTE’s upcoming device. 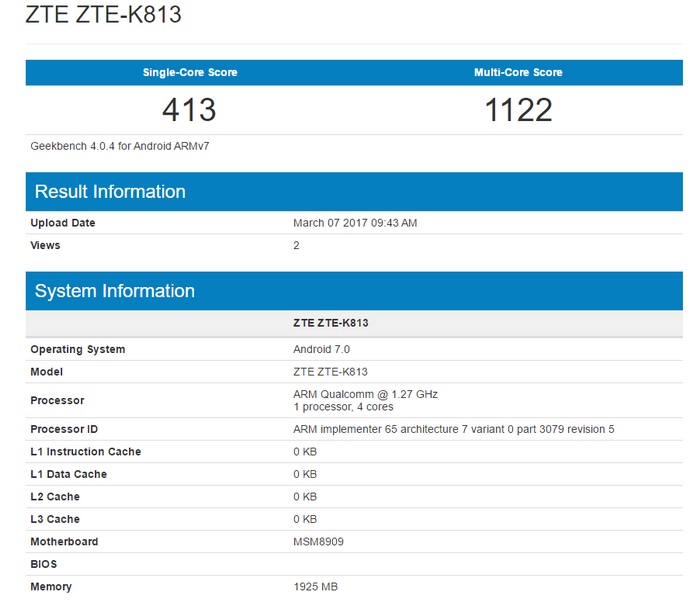 In the GeekBench listing, the ZTE K813 got 413 points in single-core test and in muli-core test it received 1122 points. As per the listing on Geekbench, the ZTE K813 has 2GB RAM and Qualcomm Snapdragon 410 1.27 GHz quad-core processor. The handset is based on the Android 7.0 Nougat operating system.

To recall specs of recently launched ZTE Blade A2 Plus, the device offers a 5.5 inch Full HD 2.5d curved glass display that has 1920 x 1080 pixels resolution which means it has 401ppi display pixel density. The handset is powered by a 1.55 GHz MediaTek MT6750 octa-core processor and Mali T860 GPU. This 4GB RAM variant has 32GB of internal memory and 32GB expandable storage slot. It comes with Android 6.0 Marshmallow operating system and is backed by a huge 5000mAh battery with fast charging support. There is also a fingerprint sensor located on the back of the device.

It has a 13-megapixel rear shooter with PDAF, Dual LED Flash and an 8-megapixel front-facing camera with Single LED flash for video and selfies. For connectivity, this handset offers hybrid dual SIM, 4G, WiFi, Bluetooth 4.1, microUSB, GPS/AGPS and 3.5 mm jack. Its dimensions are 155 x 77 x 10 mm and it weighs 189 grams.

Note – The top pic is for representational purpose only