YouTube has pushed a new update for its official Android app to add video notifications and also Ads by Google.

YouTube had promised to bring the offline video viewing capabilities to the official YouTube mobile apps. Google is now rolling out a new update for the official YouTube app that brings couple of improvements. While most people enjoyed the videos on YouTube mobile app till now, will have something to worry about – Google Ads. Droid-Life got hands on the APK and shared screenshots showing two new features.

So far, the YouTube mobile apps offer slick and smooth user interface to enjoy watching videos. Latest update for YouTube app for Android brought capability to search for other videos while watching one. On the YouTube desktop version, the Google Ads are one thing that several users get bugged about. There are no ad-blocker apps available for the YouTube videos so the user is left with an option to watch them or skip them. Same has been offered even on the Mobile apps and everyone wished that it was the end of ad placements. 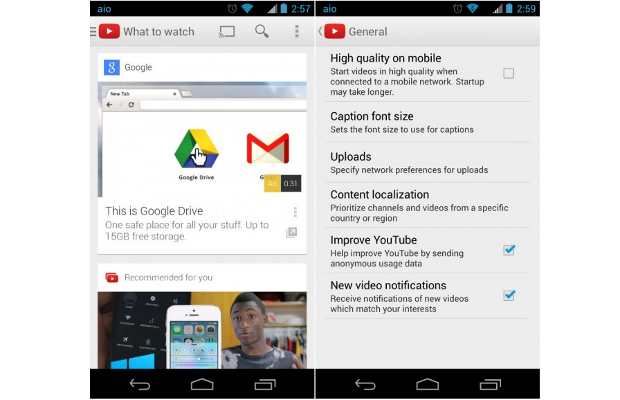 Now the YouTube mobile app for Android will get the Google Ads too. The screenshot shows that the Google Ad is placed above the videos and we hope that it stays that way. There are no ad-blockers for the Android that will work out of the box – without having to root the device. So if you root your device, you lose out on warranty. So that’s the Catch 22 situation Google puts you in to bear the Google ads on YouTube app.

Another new features spotted is the New Video Notifications that informs the user about the new videos that matches user’s interest.

Check the YouTube app for Android from the Google Play Store for the new update up the anvil.