The Valentino will be another mid-range smartphone from Xiaomi and will run on the latest Android 8.1 Oreo.

Xiaomi’s Redmi S2 is all set to launch this month but that’s not all the Chinese company has planned for mid-range smartphone lineup. Having released the first smartphone to be powered by Qualcomm’s then newest Snapdragon 636 chipset with the launch of the Redmi Note 5 Pro, Xiaomi is now working on yet another surprise.

The Chinese smartphones manufacturer is now working on a smartphone that’s going to be the first to be powered by the yet-to-be-announced Snapdragon 638 processor, which in itself will be an upgrade to the not-so-old SND 636 chipset. Codenamed “Valentino”, the device was spotted on benchmarking site Geekbench with an octa-core SDM638 CPU clocking in at 1.44GHz. 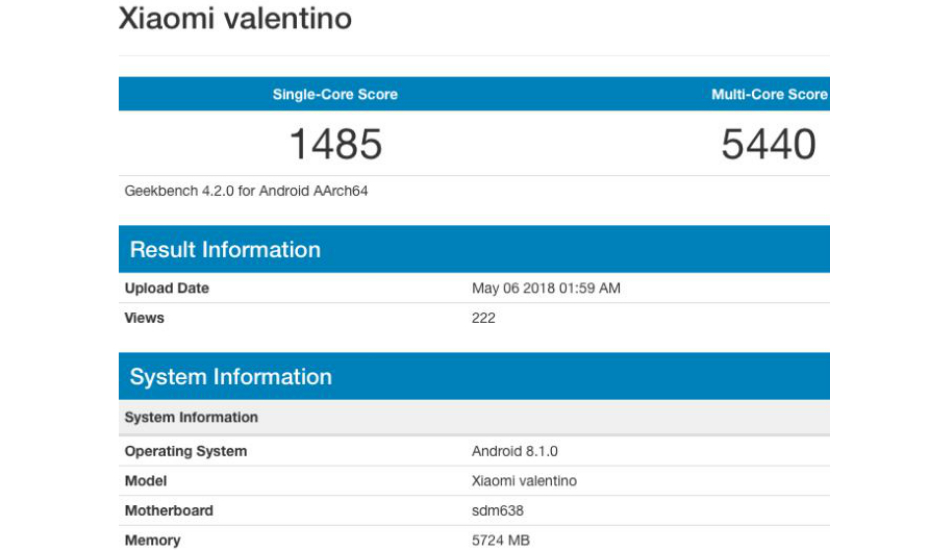 Further inside the listing, the Valentino appears to be packing in 6GB RAM due to which it manages to score 1485 points in since-core and 5440 points in multi-core tests. The test scores reveal that the SND 638 will be more powerful than Snapdragon 650 chipset but not more than the older flagship-level SND 820 processor.

The upcoming Xiaomi device will run on the latest Android 8.1.0 Oreo as being listed on the site and will soon be displayed alongside the Redmi S2 which will be announced later this month. The company has confirmed that the S2 will come with enhanced camera capabilities and will come with AI features.

Xiaomi, 8 other Chinese companies blacklisted by US govt