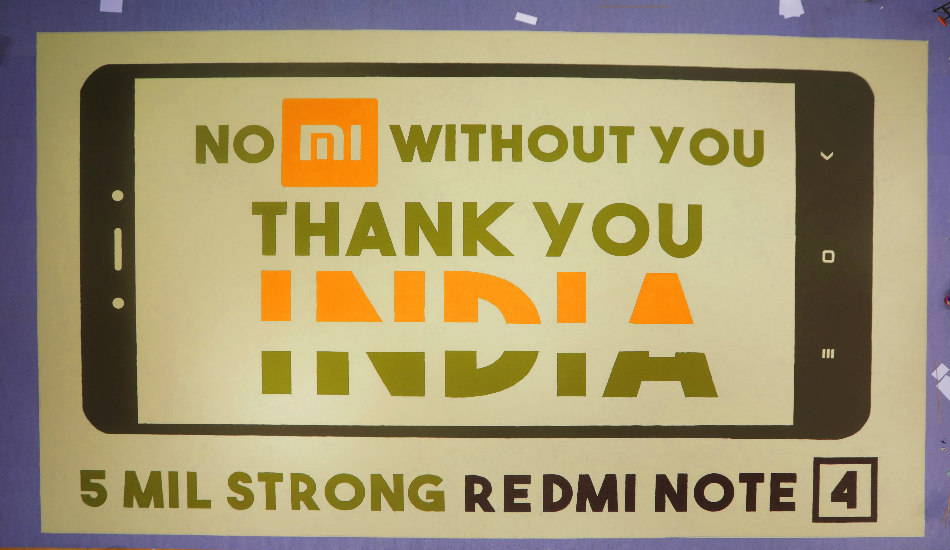 The company claims that it has sold 5 million units of the Redmi Note 4 smartphones within six months of launch.

Xiaomi’s most popular budget offering, the Redmi Note 4, has crossed another milestone. The company claims that it has sold 5 million units of the Redmi Note 4 smartphones within six months of launch and data includes from January 23 to July 23, 2017.

The company claims that Redmi Note 4 had 7.2 percent market share in India’s smartphone market, during Q2 2017. The brand further adds that 1 in every 4 smartphones sold online was a Redmi Note 4 during these months.

In order to celebrate this milestone, Xiaomi created world’s largest grain mosaic art spread across an area of 6,000 square feet at Thyagraj Stadium, New Delhi. The company used 40,000 kilograms of food grains such as pulses, rice etc to create this mosaic.

Xiaomi will be feeding five lakh people with these 40,000 kgs of grains, as a part of company’s initiative to give back to the community. These grains were donated to Robin Hood Army, an NGO which has pledged to feed 1 Million people across India and Pakistan during this Independence Day.

Meanwhile, Xiaomi has also started rolling out Android Nougat update for the Redmi Note 4 in India. The update is around 1.3GB in size and since the update is being rolled out over-the-air, it may take some time before it comes to your device. One can also manually check for the update by going to Settings ->About Phone -> Software Update. For the update, your phone should be at least 50 percent charged and connected to a Wi-Fi network.