The smartphone was launched in India last month with three different variants.

Xiaomi’s VP, Manu Kumar Jain has announced that it has sold over 1 million (10 lakh) handsets of the Xiaomi Redmi 4 in India within the first month of its launch. Xiaomi has sold 1 million Redmi 4 smartphones in 30 days. In addition to this, he has also revealed that Xiaomi Redmi Note 4 has broken all records by selling over 1 million handsets in 45 days and now Redmi 4 has gone even one step ahead by selling 1 million in just 30 days. The smartphone went on sale on May 23rd on Mi.com and Amazon India via flash sales and pre-orders every week since its launch in May.

Manu Kumar Jain has revealed this information on his official Twitter handle. His tweet reads “#Redmi4: 1+ Mn units within 1st month Thank you all for your love & support RT if you love our Redmi phones. @RedmiIndia @XiaomiIndia”. In another tweet, he said: “#RedmiNote4 broke all records by selling 1M+ units in 1st 45 days, and now #Redmi4 has gone even one step ahead @RedmiIndia @XiaomiIndia”. 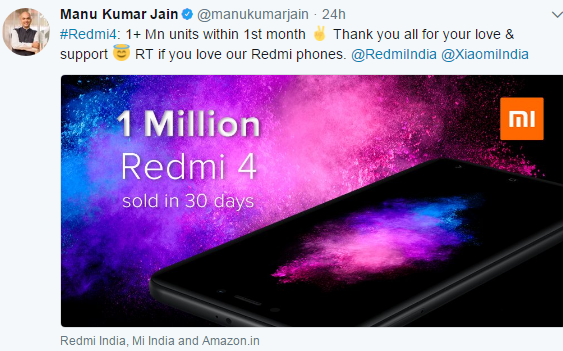 As far as specifications Redmi 4 are concerned, it has a metal unibody design and comes with a 5-inch HD 2.5D curved display with the resolution of 720×1280 pixels. On the inside, the Redmi 4 comes equipped with Qualcomm Snapdragon 435 chipset with the clock speed of 1.4GHz, along with Adreno 505 GPU. It has 2GB/3GB/4GB of RAM and 16GB/32GB/64GB of internal storage, which is further expandable up to 128GB via microSD.

The smartphone comes with a special preview of Android N which is wrapped under MIUI 8 runs on Android 6.0.1 Marshmallow operating system and comes packed with good 4100 mAh non-removable battery, that claims to last for two days under regular usage conditions with up to 18 days of standby time. The device also comes with a rear-mounted fingerprint scanner for enhanced security.