Xiaomi Redmi Note 5A set to launch on August 21

The dual SIM phone runs on Android 7.1.1 Nougat operating system out of the box with Xiaomi’s MIUI 8 on top and is fueled by 3000 mAh battery.

Just yesterday, the Xiaomi Redmi Note 5A was spotted on TENNA certification website revealing the major specifications of the device. Now the launch date of the Redmi Note 4 has been revealed by the company itself and it is set to be unveiled on August 21 in China at 7:30 PM China Time. The launch date is in line with the launch date leaked before.

Xiaomi Redmi Note 5A will feature a 5.5-inch display that has HD display with 720 x 1280 pixel resolution. It will be powered by a 1.4 GHz quad-core processor which is coupled with 2GB/3GB RAM. It offers 16GB/32GB of internal storage, 32GB expandable storage via a micro SD card, 13-megapixel rear camera with LED flash and a 5-megapixel front-facing camera. The dual SIM phone will run on Android 7.1.1 Nougat operating system out of the box with Xiaomi’s MIUI 8 on top and is fueled by 3000 mAh battery. Connectivity options of the smartphone include 4G-LTE with VoLTE, Bluetooth, WiFi, GPS/A-GPS and a micro USB port. The dimensions of the phone are 153.3 x 76.3 x 7.31 mm and it weighs 150 g. 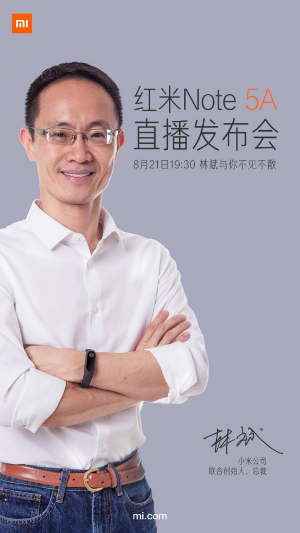 The Redmi Note 5 will feature a 5.5 inch full HD display with 1920 x 1080 pixel resolution. It will be powered by Qualcomm Snapdragon 630 64-bit Octa-core processor with Adreno 508 GPU. The smartphone will be featuring a fingerprint sensor below the display which can double as a home button. For connectivity features, Redmi Note 5 will be supporting USB Type-C 3.1, Bluetooth 5 and Quick Charge 4.0.