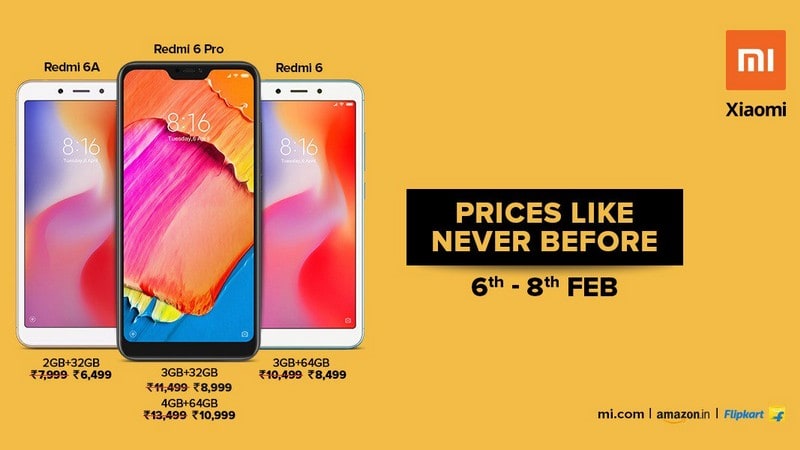 All the smartphones will retail at the discounted price only from February 6 - 8 at Flipkart, Amazon India and Xiaomi e-store.

Xiaomi has today announced a price cut for its Redmi 6, Redmi 6 Pro and Redmi 6A smartphones for a limited period. All the smartphones will retail at the discounted price only from February 6 – 8 at Flipkart, Amazon India and Xiaomi e-store.

The company has announced the price cut on its official Twitter handle. The tweet reads “Time for some Real deals! As a ‘M’illennial be smart and choose wisely!”.

TheXiaomi Redmi 6 Pro has a 5.84-inch full-HD+ (1080×2280 pixels) notched display with a 19:9 aspect ratio. The smartphone is powered by a Qualcomm Snapdragon 625 SoC with an Adreno 506 GPU. For storage, it has 3/4GB of RAM and 32/64GB of internal storage with expandable via microSD card (up to 256GB). It has a dual rear camera with a combination of 12-megapixel primary sensor and a 5-megapixel secondary sensor and a 5-megapixel front camera sensor for selfies. The smartphone 4,000mAh battery and runs Android 8.1 Oreo out-of-the-box.

Xiaomi Redmi 6A features a 5.45-inch HD+ IPS display with 720 x 1440 pixel resolution and an 18:9 aspect ratio. The phone is powered by a MediaTek Helio A22 quad-core processor along with 2GB/3GB of RAM and 16GB/32GB of internal storage. The memory can be further expanded up to 256GB via microSD card slot. It has a single 13MP rear camera with LED flash, HDR and panorama, phase-detection autofocus and a 5MP front camera. It runs on Android 8.1 Oreo and is backed by a 3000mAh battery.