Xiaomi Redmi 5A is the successor of Redmi 4A smartphone.

Spotted on Chinese website ithome.com, the poster shows a woman holding the alleged Redmi 5A smartphone. The device is sporting a metal body design as compared to the plastic body in Redmi 4A, with antenna lines running at the top of rear panel. The design of the phone is quite similar to Redmi 5A. As seen from the image, the camera with LED flash is placed on the top left and there is Mi logo at the center on the back of the device. 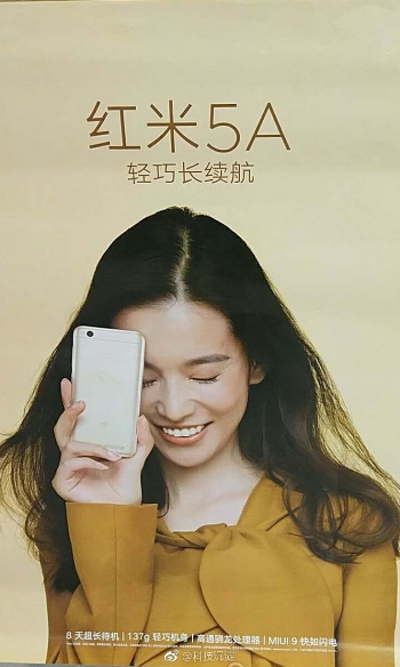 The text written at the bottom of the leaked poster mentions that the Redmi 5A will be promising a long standby time of 8 days. As per the poster, the weight of the Redmi 5A is 137 grams which is heavier than the Redmi 4A which weighs 131.5g and it will be powered by Qualcomm Snapdragon chipset. It will come loaded with MIUI 9 flavoured Android operating system and backed up by 3,120mAh battery.

As per the earlier TENAA listing, Xiaomi MCE3B features a 5-inch display that has HD display with 1280 x 720 pixel resolution. It is powered by a 1.4 GHz quad-core processor which is coupled with 2GB/3GB RAM. It offers 16GB/32GB of internal storage, 128 GB expandable storage via a micro SD card, rear camera of 8-megapixel and 5-megapixel front-facing camera.

The dual SIM phone runs on Android 7.1.2 Nougat operating system with MIUI 9 on top and is fueled by 3000 mAh battery. Connectivity options of the smartphone include 4G-LTE, Bluetooth, WiFi, GPS/A-GPS and a micro USB port. The dimensions of the phone are 140.44 x 70.14 x 8.35 mm and it weighs 137 grams. The device is listed in Black, Rose Gold, Gold, White, Red, Gray, Pink and Silver colour options. The phone has Gravity sensor, distance sensor and light sensor as per the listing.