Manu Jain, country head for Mi India, stated the focus will be on Redmi 1s and Mi3 would not be available temporarily.

Xiaomi, known as Mi India, is a chinese electronics maker that brought the Mi3 smartphone at a very lucrative price for Indian audience. Using the self-tested online flash sales, Mi has managed to sell about 95000 units of Mi3 smartphone as confirmed by Xiaomi’s Global Vice President – Hugo Barra. TechPP reported stating Mi India country head, Manu Jain confirmed that in next few weeks, the company will focus on Redmi 1s and Mi3 won’t be available. In short, Indian consumers looking for value-for-money budget phone should get ready for Redmi 1s at Rs 5999.

Mi India has already promised about 40,000 units of the Redmi 1s smartphone on the September 2. The new Redmi 1s is a budget smartphone with a 4.7-inch IPS display with 1280×720 pixel resolution. This smartphone houses a quad-core 1.6 GHz Qualcomm Snapdragon 400 mobile chipset and 1 GB RAM. By default, the Redmi 1s offers 8 GB built-in storage and comes with memory card slot. The Redmi 1s will run the MIUI based on the Android 4.3 Jelly Bean version.

At the rear, Redmi 1s packs an 8 megapixel camera with f/2.2 aperture and an LED flash. The camera offers burst mode, auto-focus, zero shutter lag, HDR and real-time filters. In the front, it has a 1.6 megapixel camera for video calling and self portraits. Other features include Bluetooth 4.0 Low Energy, WiFi, and GPS with A-GPS and GLONASS support. MI has added a 2000 mAh battery and offers support for 3G network SIM along with a 2G network SIM. 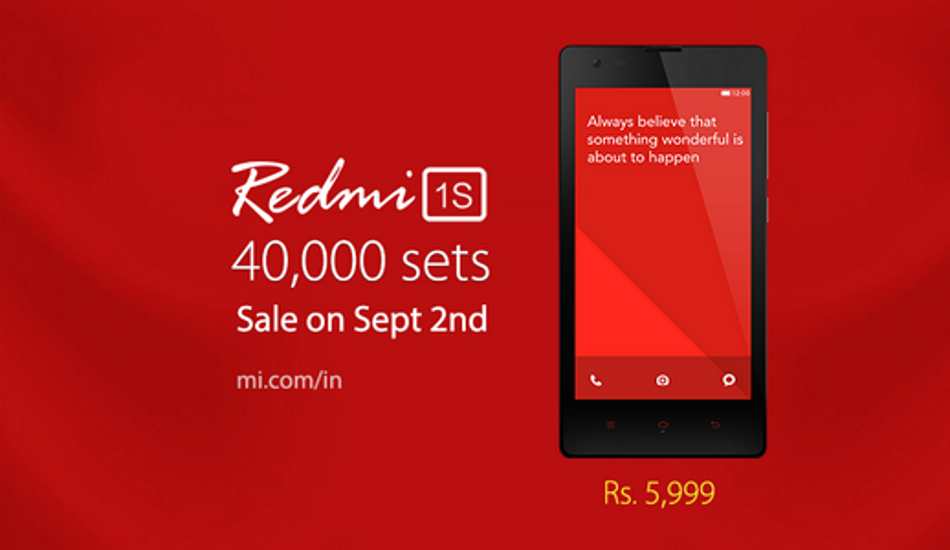 As per Jain, the company will put temporary hold on the sale of the Mi3 smartphone. Jain stated, “”We will take the final call after few weeks, once we have more visibility / data points.” That means, the Mi3 has been discontinued for sale from Flipkart but may have some possibility to make a return.

In the mean time, the Mi India company plans to bank on the Redmi 1s and upcoming Redmi Note smartphones under the sweet sub Rs 10,000 price segment. Barra also hinted that the company’s current flagship Mi4 can be expected to hit Indian shores by late 2014 or early 2015.

Just in case you are left disappointed of not owning the Mi3, you can always check out our list of top 5 smartphones which can be considered as worth alternatives of the Mi3.