Samsung AMOLED are the best screen displays for smartphones available at present.

We already know that Xiaomi is working on its upcoming Mi Mix 2 and Mi Note 3 smartphones. Now if we go by the latest reports surfacing online, the Xiaomi Mi Mix 2 and the Mi Note 3 are both expected to sport dual-curved AMOLED displays, made by Samsung.

The information comes from Chinese microblogging website, Weibo by a user who goes under the name ‘Reviewer’. The post reveals that both the smartphones will pack dual curved display from Samsung. Further, the post says that after the partnership with Samsung, the company will continue to use the OLED displays on their other devices. The recent surveys and reports says that Samsung AMOLED are the best screen displays for smartphones available at present. 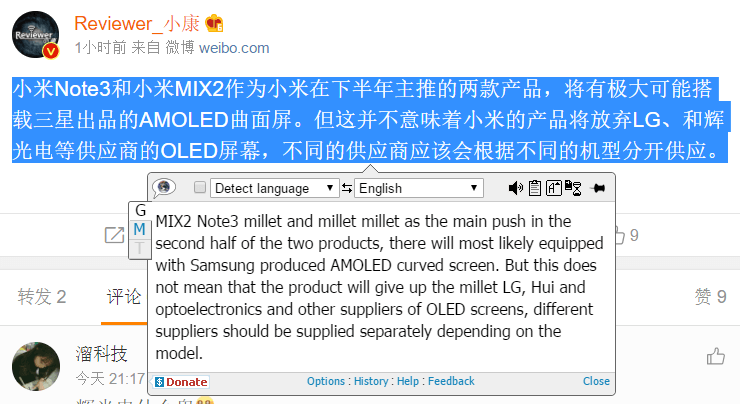 The Mi Mix 2 will have two SIM card slots with Dual Standby and runs on Android 7.1 Nougat operating system with MiUI 9 on top of it. It will be backed up by a 4,500 mAh battery. The Mi Mix 2 is said to have a 19-megapixel rear camera with LED flash light while for selfies it will offer a 13-megapixel front camera. The handset will also feature a USB Type-C port and Fingerprint sensor which is placed at the back of the device. For connectivity the smartphone offers 4G, WiFi (802.11a/b/g/n/ac), Bluetooth 4.2, A-GPS / Glonass and micro USB. It will come with Ambient Light Sensor, Gravity Sensor and Proximity Sensor.

On the other hand, as per the earlier reports, the Xiaomi Mi Note 3 will sport a curved display, similar to its predecessor Mi Note 2. It is expected to be powered by powerful Qualcomm Snapdragon 835 64-bit octa-core processor. The Mi Note 3 is also tipped to come with 8GB of RAM and 128GB/256GB of internal storage. The smartphone will reportedly feature 5.7 inch display with QHD (2560 x 1440 pixel) display and it will be backed up by a 4070 mAh battery. The Mi Note 3 is also said to come with dual camera setup however the there is no information about the camera resolution yet. The Xiaomi Mi Note 3 is rumoured to be priced around $750 which is approximately Rs 48,213. The smartphone is said to be one of the most powerful smartphones of the year if the leaked specifications actually come out to be true.