Xiaomi Mi A3 retail box has also leaked which shows the handset will come in White, Blue, and Black colours.

Update: Xiaomi Spain on Twitter has confirmed the launch date for the Mi A3 as July 17. The latest tweet comes after Xiaomi Poland revealed July 25 as the launch date.

Xiaomi’s Android One-based Mi A3 will be launching on July 23 in Poland. The launch date has been confirmed by Xiaomi via the Mi Community forum The event will be held in Warsaw, Poland on the said date. The company is also expected to introduce the Mi A3 Lite alongside.

As per a report by WinFuture.de, the Mi A3 will be a rebranded Mi CC9 smartphone, but with a different processor. The Xiaomi Mi A3 smartphone will be powered by Snapdragon 665 SoC coupled with 4GB RAM and 64GB and 128GB internal storage. It will feature a 6-inch full-HD+ AMOLED display with 1,080 x 2,240 pixels resolution with a waterdrop notch to house the 32MP selfie camera.

The Xiaomi Mi A3 is said to feature a 48-megapixel primary rear camera with an f/1.79 aperture, an 8-megapixel ultra wide-angle and a 2-megapixel telephoto lens. For the front, the phone will have a 32MP selfie camera with f/2.0 aperture housed inside a waterdrop notch. It is rumoured to feature a 4,000mAh battery with USB Type-C for fast-charging support. The phone will have an in-display fingerprint sensor. 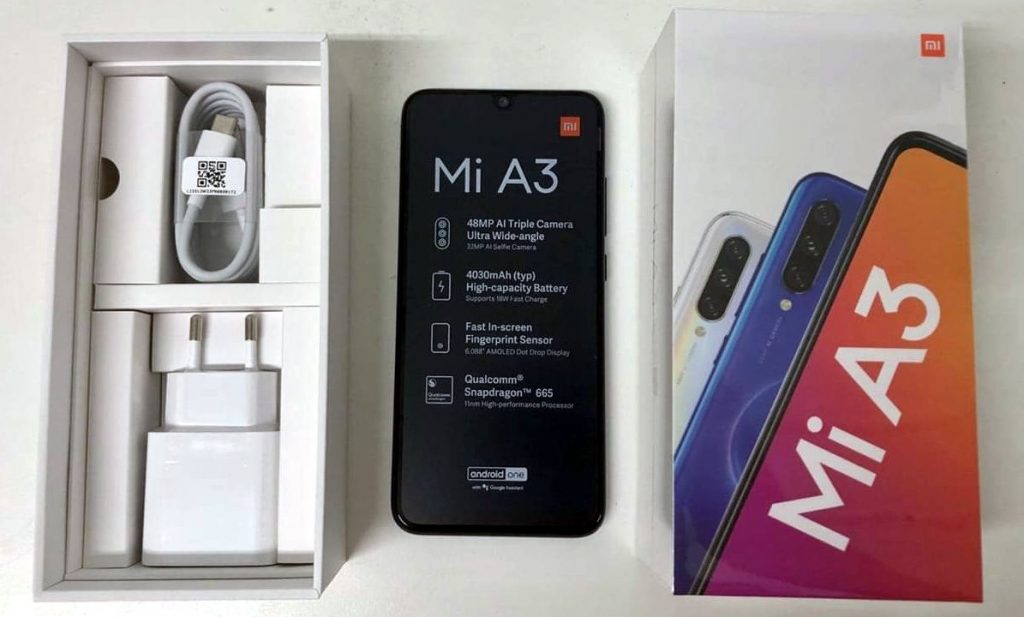 Meanwhile, Mi A3 retail box has also leaked which shows the handset will come in White, Blue, and Black colours. The box has confirmed that the phone will have a 48-megapixel main camera and ultra-wide-angle lens. The phone will have 4030mAh battery with support for 18W fast charging and in-display fingerprint scanner. It will feature 6.088-inch AMOLED Dot Notch display and Snapdragon 665 11nm SoC.