Xiaomi might finally be gearing up for their second device under the Android One initiative as the Mi A2 as a Geekbench spotting indicates the device might be released anytime soon. The successor to last year’s Mi A1 will be flaunting similar specifications to the Mi 6X which was launched earlier this year.

When Xiaomi launched the Mi 6X back in April, users were curious as to when the company will release its stripped up “pure” Android counterpart. It appears that Xiaomi is on the verge of announcing the launch date for their upcoming Android One device as the phone makes its way to a Geekbench listing.

It’s pretty well known now that the Mi A2 will be the stock Android variant of the earlier released Mi 6X, just like the Mi A1 was to the MIUI-clad Mi 5X. The latest Geekbench spotting confirms the same with the A2 opting for a Qualcomm Snapdragon 660 SoC which is the same chipset that powered the Mi 6X. The variant in question appears to come with 4GB of RAM and also runs the latest version of Google’s mobile OS, Android 8.1 Oreo.

Overall, the Xiaomi Mi A2 was able to output 1630 points in single-core test and an impressive 4,657 points on multi-core test. It needs to be noted that benchmark tests were done on the 4GB variant and if there’s indeed a 6GB RAM version like the one found on the Mi 6X, the performance of the device will improve significantly. 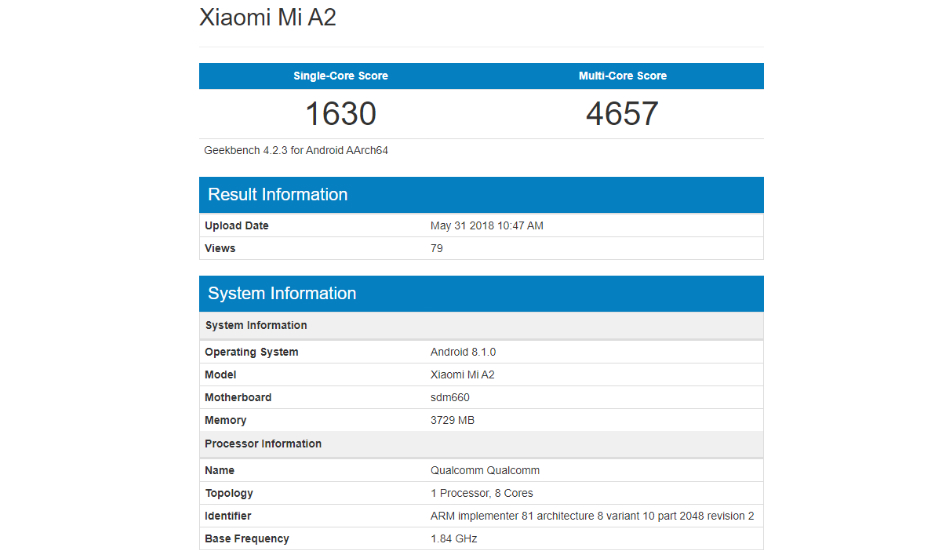 If rumours are anything to be believed, the Mi A2 will feature a 6-inch LCD display with a front facing 20MP camera on top. The device is also expected to equip a dual camera system like its predecessor with a 12MP lens as well as a 20MP secondary sensor. The A2 is expected to come with a USB-C port that supports Quick Charge 3.0 for faster charging.

An announcement in June won’t be surprising considering Xiaomi took two months to unveil the Mi A1 after launching the Mi 5X last year. With a month and a half already up since the company launched the Mi 6X, the Mi A2 might not be far away from an official unveiling. Reports also suggest that there will be a Lite version of the Mi A2 with a smaller 5.84-inch display and a notch on the front.