Xiaomi is all set to hold its major launch event tomorrow to announce its flagship smartphone Mi 8 along with the new MIUI 10 and its fitness tracker, Mi Band 3. Alongside, it is also said to launch Xiaomi Mi 8 SE which will basically be a toned down version of the Mi 8.

Xiaomi is all set to hold its major launch event tomorrow to announce its flagship smartphone Mi 8 along with the new MIUI 10 and its fitness tracker, Mi Band 3. Just yesterday, it was reported that company might also be launching another smartphone which is dubbed as Xiaomi Mi 8 SE. And now we have some leaked specs of the Mi 8 SE making rounds on the web. The Mi 8 SE will basically be a toned down version of the Mi 8.

As per the leaked specs, via Slashleaks, the Xiaomi Mi 8 SE will be powered by the new Qualcomm Snapdragon 710 processor instead of the flagship Qualcomm Snapdragon 845. For the camera department, the smartphone is said to feature a dual-camera setup at the rear with unknow sensors at the moment, enhanced by Xiaomi’s AI technology. For the front, there will be a 20-megapixel sensor for selfies and video calling. It will reportedly run on Android 8.1 Oreo with MIUI 10 on top of it. 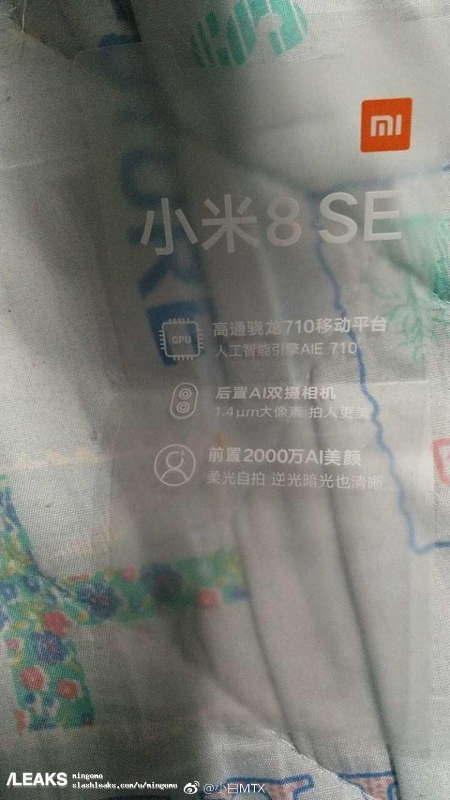 The flagship Xiaomi Mi 8 is said to launch in eight countries including Egypt, France, India, Italy, India, Russia, Spain, Thailand, and Vietnam. An official teaser has been posted on Reddit by Xiaomi which shows a Mi Logo which is surrounded by eight famous monuments from various countries around the world. The poster no doubts hint that the smartphone will be launched in global market after the official launch on May 31.

The Mi 8 is reported to feature a 6.2-inch full HD+ (2280 x 1080) IPS LCD display with 18:9 aspect ratio. The smartphone will be powered by the Qualcomm Snapdragon 845 SoC coupled with 6GB of RAM and 128GB internal storage, though the phone will probably arrive in more than one variant.

Recently, pricing details of the Mi Band 3 also leaked online. As per the leak, the Xiaomi Mi Band 3 will be priced at 169 Yuan which is approx Rs 1,800. The Mi Band 3 is the successor of Mi Band 2. The price is somewhere close to with the price ofXiaomi Mi Band 2, which was launched in India for Rs 1,999 but now retails at Rs 1,799.