An independent developer takes the final step, and released much delayed Android version of one of the most widely utilised media player across the globe.

It would not be wrong to say that VLC or Video Lan Client media player is possibly one he most widely utilised media player across the globe. And now this media player has been made available for the Android mobile operating system as well.

Even now its an independent developer and not the official one has released the alpha version of the VLC player for Android. This is in no way related to the VLC developers. As VLC is an open source project independent developers are allowed to make changes to the software in order to make use of that. 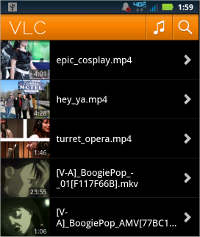 “There are two builds available of VLC for Android, known as NEON and NONEON. The difference is in the processor type. Because VLC for Android makes use of the NDK (Native Development Kit), it is compiling native-level binaries that will only work on the processor class for which they were designed. This means that the same build will not work across all devices,” the developer advices through his website.

So before you go ahead and download the software, you should check which type of CPU is used by your device. To check this all you need to do is to open the Cpuinfo file using either a file manager on your device or simply ADB, locate a file called /proc/cpuinfo and open it.

This VLC player is compatible with devices running version 2.1 and above. Users can download the supported application from the links given below.