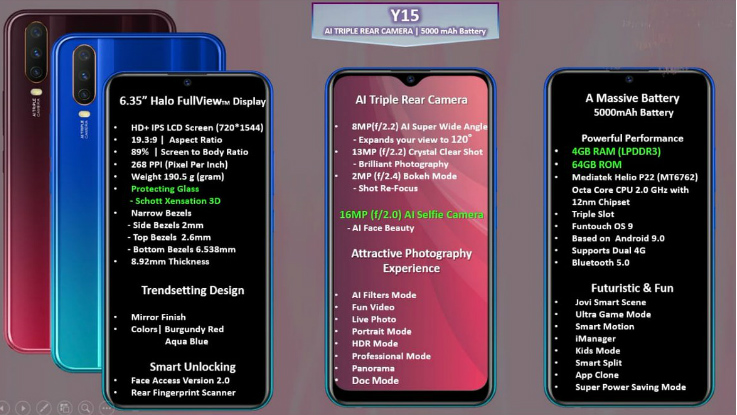 Vivo Y15 and Y17 price smartphones are now available at discounted price on Flipkart and Amazon.

Vivo Y17 was launched in April this year for Rs 17,990. It has received a price cut of Rs 3,000 after which, the phone now retails at Rs 14,990. Both the smartphones are now available at discounted price on Flipkart and Amazon.

Vivo Y15 features a 6.35-inch waterdrop notch HD+ display with a 1544 x 720 pixels resolution. The phone is backed up by 5000mAh battery and it runs on Funtouch OS 9 based on Android 9.0 operating system out of the box.

The phone is powered by an octa-core MediaTek P22 (MT 6762) SoC processor. It has 4GB of RAM along with 64GB of onboard storage which can be expanded up to 256GB via microSD card. The phone sports a fingerprint sensor on the rear. There are triple rear cameras with a combination of a 13-megapixel primary camera with an f/2.2 aperture, an 8-megapixel ultra-wide lens with 120-degree field of view, and a 2-megapixel depth sensor. On the front, there is 16-megapixel snapper with an f/2.0 aperture.

The Vivo Y17 features a 6.35-inch HD+ display with a resolution of 720×1544 pixels. It is powered by Octa-core MediaTek Helio P35 processor with PowerVR GE8320 GPU. It has 4GB of RAM and 128GB of internal storage which can be expanded upto 256GB via microSD card. The device sports a Fingerprint Sensor at the back panel.

The phone has AI triple rear camera setup with 13MP primary sensor with f/2.2, 8MP wide-angle secondary sensor and 2MP depth sensor with f/2.4. On the front, it has a 20 MP front camera for selfies. The Vivo Y17 runs on Android 9.0 Pie operating system and is backed up by a non-removable Li-ion 5000mAh battery with 18W fast charging support.