An official render of the Vivo X27 has also surfaced online that shows the front of the phone featuring pop-up selfie camera. It also shows the triple rear cameras on its back.

Vivo has already confirmed that it will announce its X27 smartphone in China on March 19. Now ahead of the launch, the promotional posters of the Vivo X27 have surfaced online. Alongside, the TENAA listing has also been now updated with images.

The promotional posters of the Vivo X27 show the smartphone's gradient blue and a white-pink colour option. An official render of the Vivo X27 has also surfaced online that shows the front of the phone featuring pop-up selfie camera. It also shows the triple rear cameras on its back. 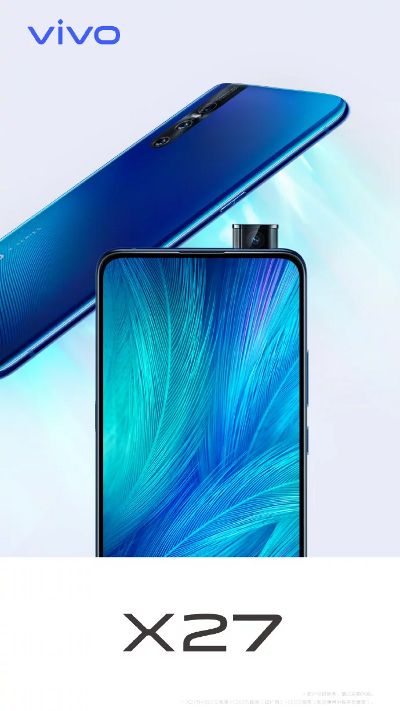 The updated TENAA listing with images shows the Vivo X27 in blue colour. The images show us that the smartphone looks similar to the V15 Pro that was launched last month. The phone features a triple-camera setup at the back placed vertically.

The front of the phone features a notch-less display. However, the leaked render showed that the smartphone would come with a pop-up camera. The images show that the X27 doesn't have a fingerprint scanner on its back. It will be featuring in display fingerprint sensor similar to the V15 Pro.

The specifications revealed by TENAA include a 6.39-inch full HD+ display with 1080 x 2340 pixel resolution. The TENAA listing mentions that the device is featuring triple rear cameras - 48 MP + 13 MP + 5 MP. For the front, it is having a 16-megapixel selfie camera. It is powered by a 2.2 GHz octa-core processor which is coupled with 8GB RAM. It offers 128GB/256GB of internal storage and expandable storage via a micro SD card. It runs on Android 9.0 Pie operating system and is fueled by 3920 mAh battery.

Vivo iQOO to come with 12GB RAM and Snapdragon 855 chipset?