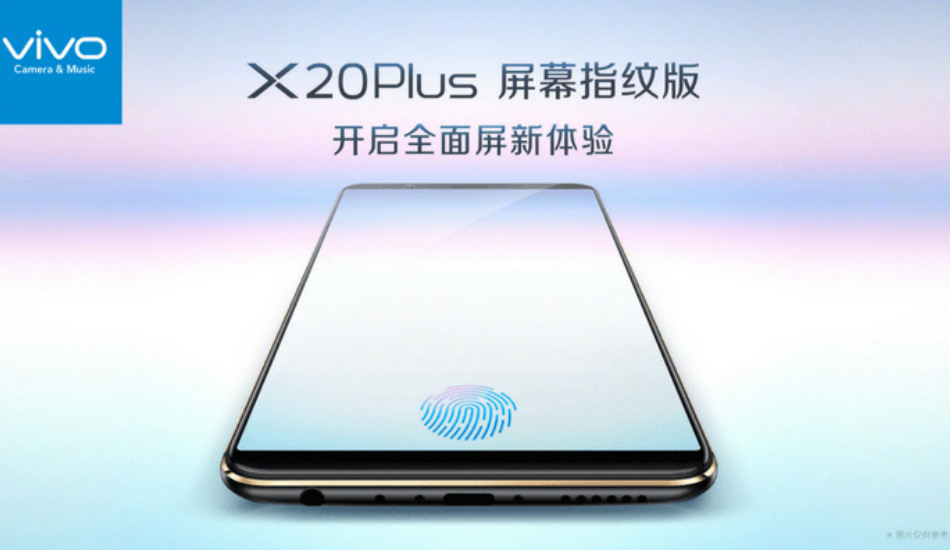 The company has officially launched the Vivo X20 Plus with an in-display fingerprint sensor.

Vivo has launched the latest smartphone in China. However, there is no word on the pricing and availability of the upcoming device, but it is reported to be available around Yuan 3998, which roughly translate to Rs39,918.

The latest smartphonecomes with Synaptics Clear ID 9500 in-screen fingerprint sensor. The sensor is placed between the OLED display and the mainboard. Smartphone makers have long struggled to bring out in-display fingerprint scanner. With Vivo finally managed to crack the code, the path is now set for others to follow.

Talking about key specifications, the smartphone shares specifications akin to Vivo X20 Plus. This means you get a 6.43-inch Full HD+ Super AMOLED display, which bears an aspect ratio of 18:9 and a screen resolution of 2160 x 1080 pixels. The smartphone is powered by a 2.2GHz octa-core Qualcomm Snapdragon 660 processor along with 4GB of RAM and 128GB of internal storage. The memory can be further expanded up to 256GB via micro SD card slot.

X20 Plus sports a dual-camera setup which comes with a combination of 24-megapixel primary camera with f/1.8 aperture, OIS and there is a secondary 5-megapixel shooter. For the front, both of them sports a 12-megapixel shooter with soft LED flash and f/2.0 aperture. The smartphone packs a 3800mAh battery. The X20 Plus UD measures 165.2 x 80.02 x 7.35 mm and weighs 183.1 grams. On the connectivity front, it supports 4G VoLTE, Bluetooth 5.0, WiFi, GPS, USB Type-C port and dual-SIM slot.