The Vivo 1818 is expected to be the European edition of Vivo Y93 powered by Snapdragon 439.

A new Vivo phone with model number Vivo 1819 has appeared on Geekbench benchmarking website. The listing has revealed quite a few specifications of the upcoming smartphone.

As per the listing, Vivo 1819 is fueled by MediaTek MT6771 SoC which is nothing but the Helio P70 chipset. The SoC is coupled with 4 GB of RAM and it is preinstalled with Android 9 Pie operating system out of the box. In the single-core test, the Vivo 1819 handset has scored 1562 points while in multi-core test, it scored 5964 points.

Earlier, Vivo 1819 along with Vivo 1818 and Vivo 1820 were certified by the Eurasian Economic Commission (EEC) in Russia. 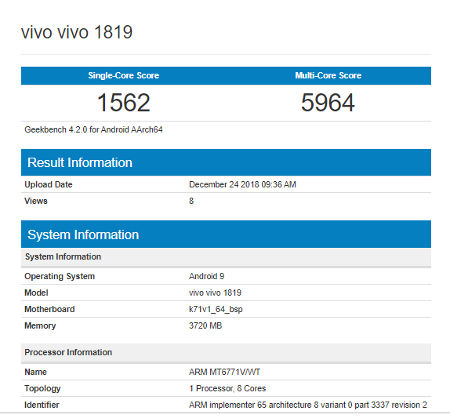 The Vivo 1818 is expected to be the European edition of Vivo Y93 powered by Snapdragon 439. The Vivo 1820 that carries support for 22.5W rapid charging could be an upcoming high-end Vivo phone. As far as Vivo 1819 is concerned, the phone in the Geekbench listing has revealed some of its specs for the first time.

As of now, no more other details of Vivo 1819 are known. We have to wait for some more days for the phone to surface in further leaks.