The phone has 4GB of RAM and it runs Android 8.1 Oreo out-of-the-box.

A mysterious smartphone from Realme has been spotted on GeekBench benchmark site revealing a few of its specifications. Though the listing has not revealed the name of the upcoming Realme Phone but it comes with model number RMX1833 and is speculated to be the Realme 3.

As per the GeekBench listing which was firstspotted by Slashleaks, the Realme phone is powered by the Helio P60 processor which is the same chipset that was used in the Realme 1 phone. Realme has four smartphones and only Realme 1 came with the MediaTek SoC while the other ones (Realme 2, Realme 2 Pro and Realme C1) are powered by Snapdragon processors. 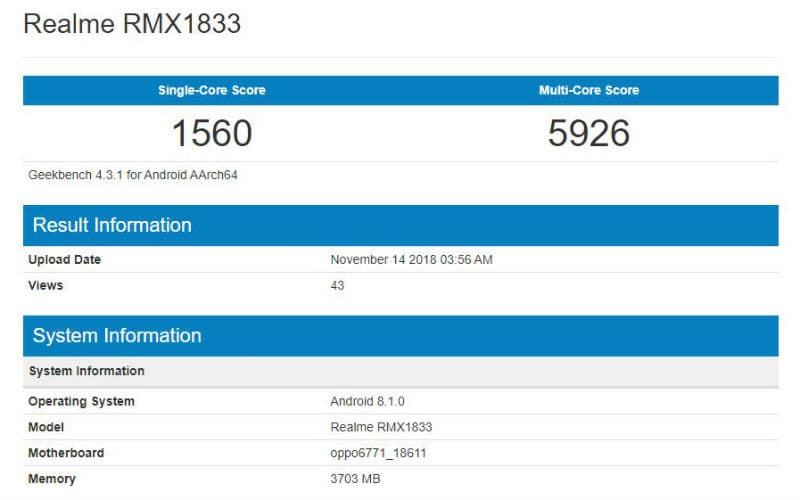 Besides the MediaTek Helio P60 processor, the Geekbench listing has also shown the RAM and operating system. The phone has 4GB of RAM and it runs Android 8.1 Oreo out-of-the-box. The Realme handset managed to score 1560 in the single-core test while in multi-core, the phone scored 5926.

Recently, Realme CEO Madhav Sheth announced that the brand will be bringing Oppo’s VOOC fast charging technology to its future phones. If made a reality, the Realme 3 or whatever it might be called will be the first smartphone under the Realme lineup to come with any kind of relevant fast charging.