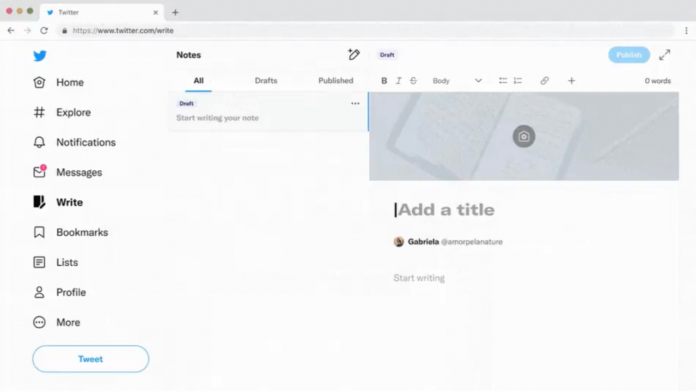 Twitter has a word limit of 280 characters for each tweet and people have been wanting a way to write more on the app instead of creating multiple tweets. As a result, Twitter has started testing a new long-form blogging feature named Twitter Notes, the company confirmed in a tweet.

The platform says the feature is currently being tested with a select group of users in the US, UK, Canada, and Ghana, and that people “in most countries” can read Notes on and off Twitter. For readers in countries where the test will be running, one will see Note cards—Tweets with Note previews and links—in their Home timeline if you’re following someone participating in the Tweet test group for Notes, or if someone you follow Retweets, Quote Tweets, or shares a link to a Note. Readers in some countries will not be able to view Note cards or Notes at this time, conveys Twitter.

In a couple of Tweets, Twitter shared how the feature works. One will have to head over to the ’Write’ section of the app where users can start writing a Note, and can then embed that Note into their tweet when finished. As per what writers have published, these notes appear as long-form posts that can have tweets, videos, and images all in a single note.

These Notes will appear as Note cards in people’s timelines. A Note card is a Tweet that contains a preview of a Note link. Once the link in the card is selected, it will open up the Note created by the writer. For those of you wondering if Notes also have a word limit, then yes, it does have a word limit as well. A Note title is limited to 100 characters, and the body of a Note is limited to 2,500 words.

One can also edit the note once it has been published and the reader will be notified of the same with the help of an ’Edited’ label. Further, Twitter also says that it is not moving away from its short-form Tweets. “The purpose of the tool we are testing is to provide an additional experience for writers on Twitter outside of Tweets”, the company said.

When is the feature rolling out for everyone?

Twitter says that it plans to gradually expand the number of people with access to this feature. The timing will depend on what it learns during the current test which will also be based on the feedback it receives from the testers.