Toshiba is set to unveil the new REZGA AT703 tablet with Nvidia Tegra 4 tablet with Android 4.2 Jelly Bean running on it with stylus.

Toshiba is ready to show its new generation tablet – REZGA with Android 4.2 Jelly Bean running on it. This tablet is focused at those who love to take down notes using the stylus bundled with the tablet. As of now, there is no clarity on the availability or pricing of this tablet. 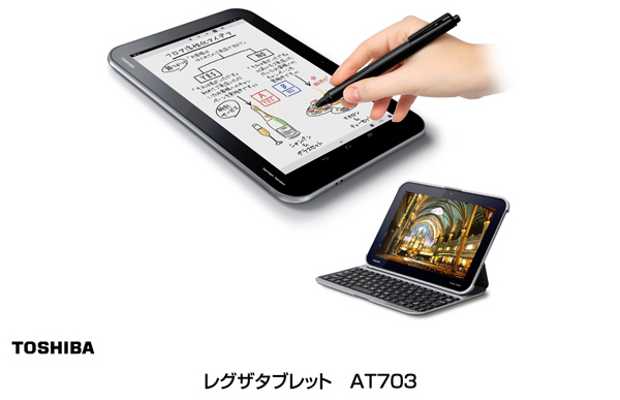 The Toshiba tablet has an 1.8 GHz quad-core Nvidia Tegra 4 mobile chipset, 2 GB RAM and comes with 32 GB on-board storage space. There is a memory card slot to add more storage. It has an 8 megapixel camera at the rear for clicking images and recording videos. In the front of the tablet, there is a 1.2 megapixel camera for video call or self portrait.

Other features of this tablet include Wi-Fi (802.11 a/b/g/n/ac), Bluetooth 4.0, and features a battery that offers 9.5 hours of run time. Toshiba also will bundle an 87 keys bearing Bluetooth keyboard along with the stylus. By default, the tablet runs Android 4.2 Jelly Bean update.

One novel aspect of this tablet is that it features Harmon/KARDON stereo speakers and microphone for better quality audio experience.