The security threats on iOS devices are few and far between but users still need to be careful about it.

Seasoned iOS users understand the low level of threats faced by iPads and iPhones, and this makes them slightly complacent. But the fact, that there are security threats, should be enough for them to be vigilant and careful as much as possible.

For example, things may go wrong while checking mails if they click on malicious links or their identity may be stolen if they inadvertently give away some personal information. The iTunes app store is now getting more and more security apps which help users protect their personal data, and save their identity from being stolen.

Some methods of staying safe are downright obvious, such as password protection and auto locking physical access to the phones. Other methods include, automatically wiping off the iPhone data if there are more than ten attempts to access it with wrong passwords, and then come the apps which manage everything for the users, while they work with the phones.

The first app in the list is called Intego VirusBarrier which secures iOS devices by scanning all the email attachments and documents being downloaded.

Files that come into the device through cloud services such as DropBox may contain malware. The app makes use of Intego VirusBarrier X6 technology to find out and remove all the malware. The app also scans websites for phishing and malware hosting. 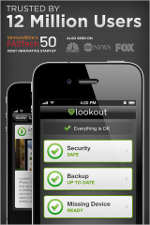 The VirusBarrier app is not allowed to run scheduled scans but it does the required on demand scans. The app is priced at $2.99 and works with iPhone, iPod Touch and iPad devices. For every extra one year subscription, users are required to pay $1.99 every year.

LookOut Mobile Security is an iCloud type app which works as a standalone app and can also help the users control some of the settings of their iOS devices remotely. 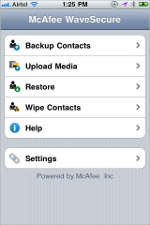 Whenever the phone tries to access unsecured wireless networks, the LookOut Mobile Security app warns the users about it. The iPhone users also have the option to backup their data at the LookOut website.

The backups thus stored can be transferred to other smartphones and tablets, other than iOS devices as well. Users can also track their phone through the LookOut website in case they lose it. The app is available for download in iTunes store for free.

The McAfee WaveSecure app resides on the phone memory itself, and the app shows different options such as Secure Phone, Tracking, Backup data, Media Upload and settings. 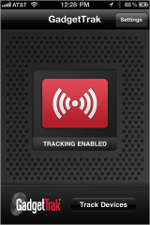 Phone’s data is backed up on the McAfee servers, and the best part is &#151 it happens automatically. The location tracking feature of WaveSecure works very well, the users just have to visit the website of WaveSecure and they are shown the approximate location of their phone on a map.

GadgetTrak is an anti-theft app which has been released by ActiveTrak for the iOS platform. The app helps users find their phone if it gets lost, the method runs along the expected lines.

As soon as one notifies the site about the missing of his mobile phone, the service tracks the device for the users. Even if a malicious person gets the phone and the password, he will not be able to turn the tracking off provided he isn’t able to get into the website account of the users on GadgetTrak website. 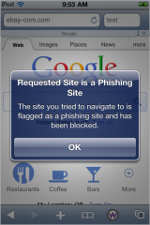 It is a feature rich browser which enables iOS users to be confident while they browse websites or shop online. Users are warned when they are about to enter a malicious website and even Google search results are placed into different categories indicating whether they are safe or not.

So while conducting financial transactions, or entering financial information users can be sure of safe shopping experience.