Tecno Spark 6 Air to launch in India on July 30 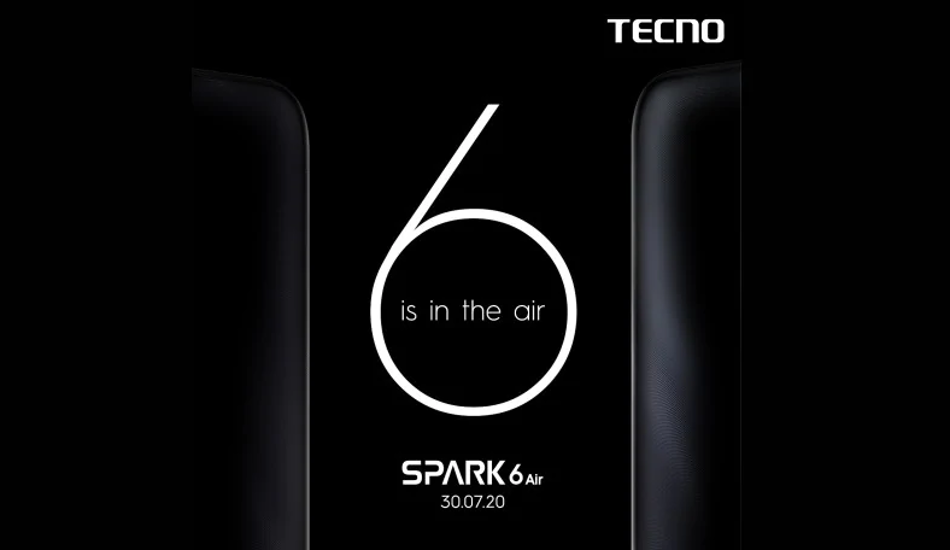 Tecno Spark 6 Air will be available on Amazon after its launch in India.

Tecno Mobile is all set to launch its new smartphone under its Spark series in India this week. Dubbed as Tecno Spark 6 Air, the phone will be launched in India on July 30.

The company is teasing its upcoming smartphone launch with “#BestBattery” from last few days on its official twitter handle. The tweet suggests that the phone will be arriving with a huge battery and Tecno is claiming it to be the best battery smartphone.

The teaser image in the Amazon listing reveals that Tecno Spark 6 Air will come with a waterdrop notch display. At the back, there will be a triple rear camera setup. There will also be a rear-mounted fingerprint scanner on the phone. None of the specifications of the Tecno Spark 6 Air have been revealed at the moment.

Tecno earlier this month launched Tecno Spark 5 Pro at Rs 10,499. The phone comes with a punch-hole design at the front and there is a quad-camera setup at the back panel along with a physical fingerprint reader. The Tecno Spark 5 Pro comes with a 6.6-inch HD+ display with a screen resolution of 1600 x 720 pixels, 20:9 aspect ratio and 90.2 per cent screen-to-body ratio.

The smartphone is powered by an octa-core MediaTek Helio A25 processor. The smartphone is available with 4GB of RAM and 64GB of internal storage. It has a quad-camera setup with a combination of a 16-megapixel primary with f/1.8 aperture, 2-megapixel wide-angle lens with 120-degree FoV, 2-megapixel depth sensor and an AI shooter. For the front, it comes with an 8-megapixel selfie shooter with f/2.0 aperture with dual-LED flash.

The Tecno Spark 5 Pro runs on Android 10 operating system and it comes with a 5000mAh battery. The brand claims that it offers 17 hours of video, 115 hours of music, 13 hours of gameplay, 18 hours of browsing, 31 hours of call time and 480 hours of standby time.