Tecno has announced that it will be launching its Pova 5G smartphone in India on 8th of February. 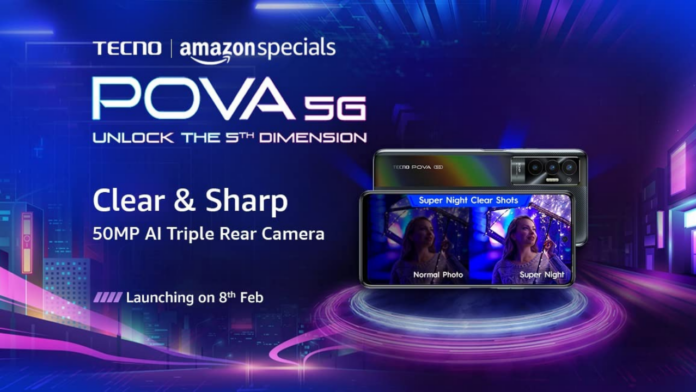 Tecno is all set to launch its first 5G smartphone in India which is called the Tecno Pova 5G. Tecno has had a decent reputation in the Indian market for some of its value for money offerings but with Tecno Pova 5G, this remains to be seen. However, you won’t have to wait for long as the Tecno Pova 5G is launching tomorrow in India, which is 8th of February.

Along with the teaser for the launch, an Amazon landing page has gone live which also confirms how the phone will look and some of its key specifications as well. These include a Dimensity 900 SoC under the hood of the Pova 5G. The chipset has has been popular amongst brands off late, including Vivo, Honor, Oppo, and even OnePlus is rumoured to soon unveil a Nord device with this SoC.

Coming back to the Tecno Pova 5G, the phone will have 11 5G bands which is again a plus for consumers considering 5G is not very far away from launch in India. The device will carry support for Panther Game Engine 2.0 for an enhanced gaming experience. It will pack a huge 6000mAh battery with 18W fast charge support. The company claims a 50% charge in 33 minutes which is not bad.

The phone will run on HiOS 8.0 UI which should most probably be based on Android 11. As the device has already debuted in African markets in December of last year, we know that it should have a 6.95-inch full HD+ display with 1080 x 2460 pixel resolution. Further, the display has 480ppi pixel density, an 82.8 percent screen-to-body ratio, and a 120Hz refresh rate.

The Tecno Pova 5G seems to be a potential rival to the recently unveiled Oppo Reno 7 5G (Review). Both of them are powered by the Dimensity 900. Moreover, where the Tecno Pova 5G has support for 11 5G bands, the Reno 7 has support for 13 of them which makes it an even safer bet for buyers as to what bands will be supported in India for 5G connectivity.

But, we are calling the Tecno device as a competitor to the Reno 7 because of the latter’s price being on a higher side, at Rs 28,999. If Tecno can price their smartphone as well as they did it in Nigeria (NGN 129,000 (approx Rs 23,500)), it can truly rival the Reno 7. As for other specifications, the Tecno Pova 5G already has a much bigger battery than the Reno 7 that proves as another advantage for it.