Oppo Reno 7 Review: Its strength is its weakness?

With the launch of Oppo Reno 7, the Chinese manufacturer is adding another Reno series device to its portfolio. But is it worth it? 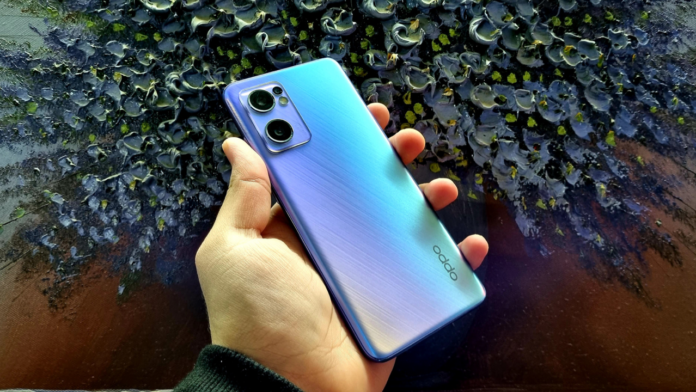 Oppo Reno series has been loved by many in India because of Oppo’s design language and the fact that it performs impressively and competes with the likes of big players, such as Samsung. A new year has brought a new Oppo Reno series smartphone to India and it is none other than the Reno 7. Let’s review the Oppo Reno 7 and find out if it retains its impressive value at Rs 28,999 and justifies itself as a true successor to the Reno 6.

Speaking of design first, Oppo has been nailing it in this department with unique designs and the Reno 7 isn’t an exception. While the Reno 6 came with flat sides with a flat rear panel, Oppo switched back to a curved panel with curved sides on the Reno 7. Moreover, the Oppo Reno 7 has a patterned rear panel with slanting lines running across the whole panel.

We got the blue coloured review unit of the Reno 7 which changes colours to different shades of blue and even golden and pink at a certain angle. In my opinion, it is one of the gorgeous phones I have held in a long time. It has a compact form factor that is light as well. There’s also that premium feel you might be looking for. As for the rest of the elements, the power button is on the right with the volume buttons on the left. The earpiece stays on the top.

There’s a mic up top and one at the bottom. At the bottom, you also get a Type-C port for charging, a speaker grille and a 3.5mm headphone jack as well, which is difficult to find these days. There’s an Oppo branding and the camera module has three sensors and an LED flash. As we said, it’s one of the most good looking smartphones we have used and the design is definitely eye-catching.

On the front, there’s a hole-punch design for the front camera. As for the display, it’s a 6.43-inch full-HD+ AMOLED panel with a 90Hz refresh rate and Gorilla Glass 5 Protection. Moreover, it has support for HDR and 600 nits of peak brightness. The display on the Reno 7 SE gets bright enough for clear readability under direct sunlight. The colours are vibrant, and the image is sharp as well.

The viewing angles of the display are decent but not the best. This is because I could notice a rainbow effect when viewing from the top. Moreover, the chin at the bottom is quite big which looks odd at times when you notice it. There’s an in-display optical fingerprint sensor for security which is also very quick and accurate and works without any flaws.

What powers the device is a Dimensity 900 SoC from MediaTek and up to 8GB of RAM and 256GB of storage. The device gets the extended RAM feature as well. As for the software runs on ColorOS 12 based on Android 11 which is surprising, considering Oppo has already updated a bunch of its smartphones to Android 12 already.

Speaking of performance, the Dimensity 900 SoC handles day to day tasks without any issues. During the review period of the Reno 7, switching between apps, opening and closing them, browsing and various other operations were all smooth. However, as for gaming, you cannot expect the device to handle heavy gaming as it wasn’t made to do so.

However, casual gaming such as Candy Crush, RL Sideswipe, etc works perfectly fine without any lags. On the other hand, heavy games such as Call Of Duty Mobile were dropping some frames when set to the highest graphics and frame rates. Still, the experience was satisfactory and is very much playable.

Talking of satisfaction, ColorOS 12 is another one of the aspects where this device excels at. We like where Oppo is heading with its software and how it is implementing various features. While the animations are smooth and snappy simultaneously, you further get a load of features such as Flexible Windows, Split Screen for multi-tasking and a Kid Space so your children aren’t able to access apps that they shouldn’t.

For privacy, you get a bunch of features, including the ability to hide apps, lock certain apps, system cloner, and a private safe where you can keep some of your photos and videos hidden from other apps.

For customization, you get a big set of options where you can change the AOD styles, apply themes, change fonts, and apply icon packs. As far as security is concerned, you get the January Security patch which is the latest as of now. I didn’t face any issues with calls and connectivity either. The phone supports 5Ghz Wi-Fi band as well. Calls and data connectivity were fine, as you’d expect them to be.

With such a heavy set of features and other elements, the battery consumption of a smartphone increases considerably. But the Reno 7 doesn’t hesitate in handling everything efficiently. The 4500mAh cell on the Oppo Reno 7 just doesn’t want to get empty when you have a light usage. With light usage, I am referring to making some calls, watching videos and browsing through social media.

The device could easily last me a day and a half with such usage. It can even stretch till two days of usage. The screen-on time hovered around 8 to 8.5 hours. However, if you are gaming, surfing the net, consuming OTT related content, etc, the battery backup will go down for obvious reasons. Despite this, the phone can give you a good battery backup with a screen on time that can last anywhere between 5 to 6.5 hours, which is impressive.

You can charge the smartphone using the 65W power brick that is included in the box for charging. At 65W, the phone takes about 30-40 minutes to charge from 15% to 100%, and that is very quick. However, it remains to be seen how it will affect the battery life over time as such fast charging speeds usually degrade a battery’s life quicker in comparison to those which charge slower.

With the Reno series, photography remains the main focus for Oppo and this time, it has equipped the Reno 7 with a 64MP f/1.7 primary sensor, 8MP f/2.2 ultra-wide angle sensor, 2MP f/2.4 macro sensor. While on the front, there’s a 32MP selfie sensor inside a punch-hole.

The Reno 7 clicks decent photos outdoors with good levels of sharpness and natural colours. However, when you zoom in, things take a turn. The image does distort a bit at the edges for wide-angle shots, but that isn’t very noticeable. The colours look very identical to the normal shots with decent sharpness.

The performance of the camera under indoor lighting is average. When dimming the lights even more, the photo doesn’t have a lot of noise but the lack of detailing and colours just adds up to the disappointment. Portrait shots lacked detailing and the colours also seemed faded. Macro shots, on the other hand were high on detail.

The selfies looked impressive, while the night shots were below average. However, with night mode ON, the brightness went up a bit with a bit of change in details. To find out how the camera of the Reno 7 performed, check out our in-depth camera review of the same.

Load more
At Rs xx,xxx, the Oppo Reno 7 does get some things right such as the gorgeous design and the snappy performance along with a long lasting battery. But what should have been its USP, its cameras, become its major weakness. Oppo Reno 7 Review: Its strength is its weakness?