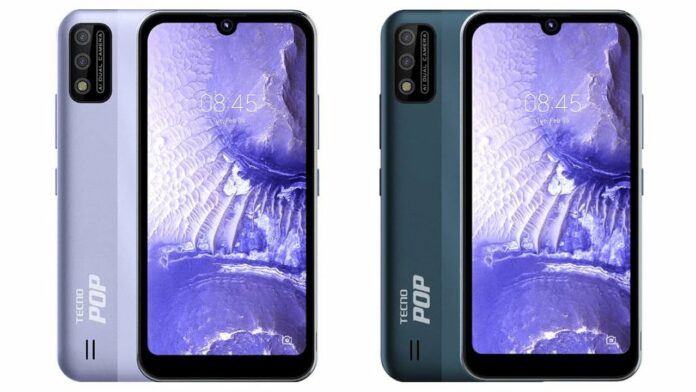 Let’s take a detailed look at the new handset’s specs, price, and availability.

The Tecno Pop 5S is priced at MXN 2,239 (approx. Rs 8,080) It is currently listed on the official website with specifications. The phone comes in Purple and Green colour variants.

As of now, there is no information on international availability, including India.

The phone sports a 5.7-inch HD+ IPS waterdrop display with 720 x 1520 pixels screen resolution. Further, the smartphone has a 18:9 aspect ratio and a 84% screen-to-body ratio.

Additionally, the smartphone is powered by a 1.4GHz quad-core Unisoc SC98632E processor. It is backed by 2GB of RAM and 32GB of internal storage. The memory can be further expanded up to 128GB via a microSD card slot.

The smartphone comes equipped with dual camera set up on the camera front. This includes a 5-megapixel primary lens and an AI lens. Further, for the front, there is a 2-megapixel shooter.

In addition, the smartphone runs on the Android 10 (Go Edition) operating system. It has a 3020mAh battery, which can be charged through a microUSB port. Besides, the phone also comes with face unlock feature but lacks support for a fingerprint scanner.