HTC, which has released about four Desire series smartphones in last five months, is now reportedly gearing up to launch another handset called in the same series which is identified as Desire 8. Engadget grabbed a press image of the purported HTC Desire 8 and shared some details about it. The date on phone’s interface states March 18 and we can expect the announcement somewhere around that time or later.

HTC Desire series has struggled a bit to set a strong foothold in the mid-range Android based smartphones. HTC had introduced Desire 501, Desire 601 and Desire 700 two months ago. And now HTC is expected to bring more stylish Desire models this year. 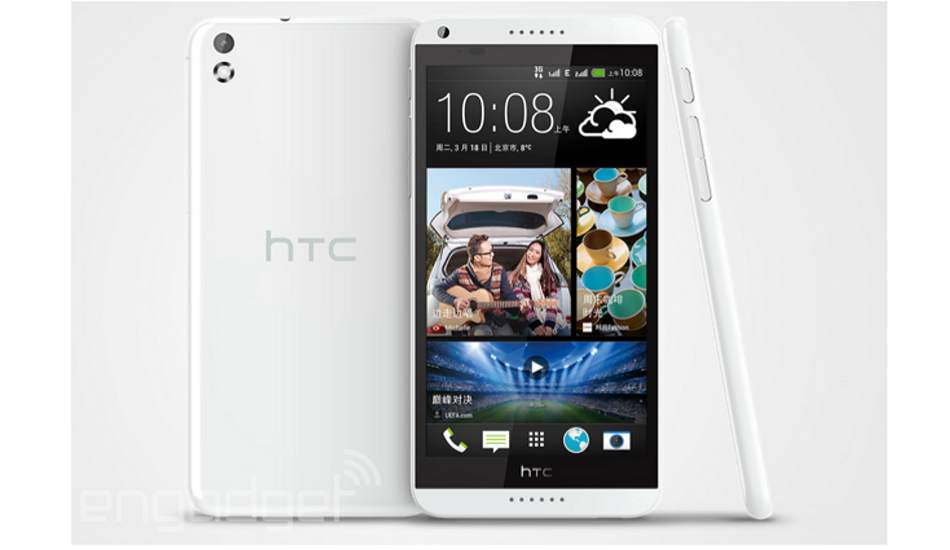 Though purported model is stated as the Desire 8, we believe that HTC might the label them as the Desire 800 series to succeed the Desire 500, Desire 600 and Desire 700 series models. The design features a dual Stereo speakers in the front on the top and bottom of the screen. The phone has a 5.5-inch touchscreen display and we hope for 720p (HD) resolution support. The image shows Dual-SIM configuration where in one SIM supports 3G network while the other is for 2G network.

The image also shows the thin profile and presence of the HTC BlinkFeed feature in the user interface. However, the image points to HTC Sense 5.5 version currently being made available to several HTC 2013 devices. The Desire 8 will have a 13 megapixel camera at the back in a corner with a LED flash below it. In the front, it said to have a 5 megapixel camera for video calling. There are no other details available on this smartphone as of now but we believe that it will be powered by one of the quad-core MediaTek chipsets. Last month, HTC announced the Desire 310 Dual-SIM smartphone with MediaTek chipset.

The new design language of the 2014 HTC devices is quite evident with this smartphone.