Sony had earlier launched Xperia XZ1 Compact at the IFA 2017 in Berlin along with Xperia XZ1 with Qualcomm Snapdragon 835.

A Sony smartphone dubbed as Sony Xperia ZG Compact was spotted on GeekBench benchmarking website in August this year. Now the same smartphone has been spotted again on Geekbench with new benchmarking scores, GSMArena reports. 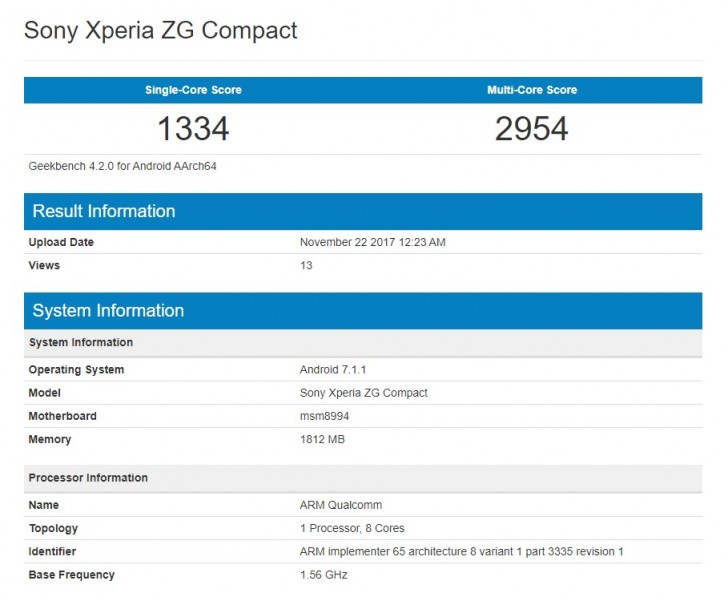 Similarly like the earlier listing, the Sony Xperia ZG Compact is shown in the listing featuring Qualcomm Snapdragon 810 chipset which came with the Z5 Compact launched back in the year 2015. The Geekbench scores of the Xperia ZG Compact are lower than that of Xperia Z5 Compact. This is quite strange as Snapdragon 810 is an old chipset which has been not used in 2017 smartphones. So we advise you to take this information with a grain of salt.

Sony had earlier launched Xperia XZ1 Compact at the IFA 2017 in Berlin along with Xperia XZ1. Both the smartphone run on the Qualcomm Snapdragon 835 processor along with Adreno 540 GPU. The Xperia XZ1 Compact 4.6-inch HD Triluminos display along with X-reality picture engine and dynamic contrast enhancement, which is protected by Corning Gorilla Glass 5. The phone is backed by a 4GB of RAM and 32GB of internal storage, which can be further expanded up to 265GB via micro SD card slot. The phone runs on 2700mAh battery with Qnovo Adaptive Charging and Quick Charge 3.0.

The primary camera comes with a 19-megapixel sensor with 1/2.3-inch sensor along with predictive capture, autofocus burst, anti-distortion shutter, triple image sensing technology and 4K recording. For the front, the device comes loaded with an 18-megapixel shooter with a 120-degree field of view, display flash and aperture f/2.4.