Sony is all set to hold its launch event at the upcoming Mobile World Congressevent to be held in Barcelona next month. The company has scheduled its launch event at MWC on February 26th and it will start at 8.30am CET (1 PM IST). Now as per a report, it is also leaked that Sony will also be unveiling Xperia XZ2 along with much in leaks Xperia XZ Pro in the event. The Xperia XZ1 will be the successor to the Xperia XZ1 smartphone which was launched last year.

Now an Irish mobile operator has accidentally tweeted that Xperia XZ2 is Coming soon and could also be unveiled at the event. The tweet which was posted on February 2 has however been deleted now. As of now, nothing much is known about Sony Xperia XZ2 specs. 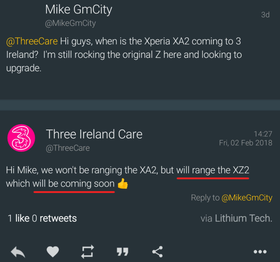 Sony has however not revealed any of the smartphone names which the company will be unveiling at the MWC event. However, a recent report has already hinted that the brand might be announcing the Xperia XZ Pro flagship smartphone with Snapdragon 845 chipset at the event. Alongside, the company was also reported before to launch Xperia XZ2 and Xperia XZ2 Compact smartphones.