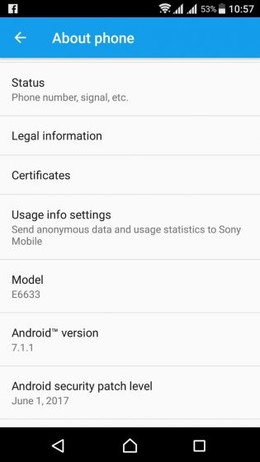 The company advises you to update when the battery in your phone is at least 50% charged, and you are connected to a Wi-Fi network. Since the update is being rolled out over-the-air, it may take some time before it comes to your device. One can also manually check for the update by going to Settings ->About Phone -> Software Update.

As per the official Xperia blog, the over-the-air update bears the build number 32.4.A.0.160 which it changes from the original build number 32.3.A.2.33, and it brings the Android security patch for 1st June 2017. The new build version, however, does not bring major changes to the device but we do expect that the update brings circular app icons support, keyboard image insertion, additional emojis, app shortcuts. Along with few new features, the update will also bring bug fixes and performance improvements.