Seems like Japanese handset maker Sony is working on a new smartphone which goes by an interesting name Sony Pikachu. The unannounced Sony Pikachu has been spotted on GFXBench benchmarking website which now reveals few of its specifications.

As per the listing on GFXBench, Sony Pikachu has a 5-inch HD display with 1280×720 pixels resolution and 5 finger gesture support. It is powered by MediaTek MT6757 Helio P20 SoC octa-Core 2.3 GHz processor coupled with Mali-T880 and 3GB RAM. It offers 32GB of internal storage out of which 22GB will be reserved for the users. Besides, it has Android 7.0 Marshmallow operating system. 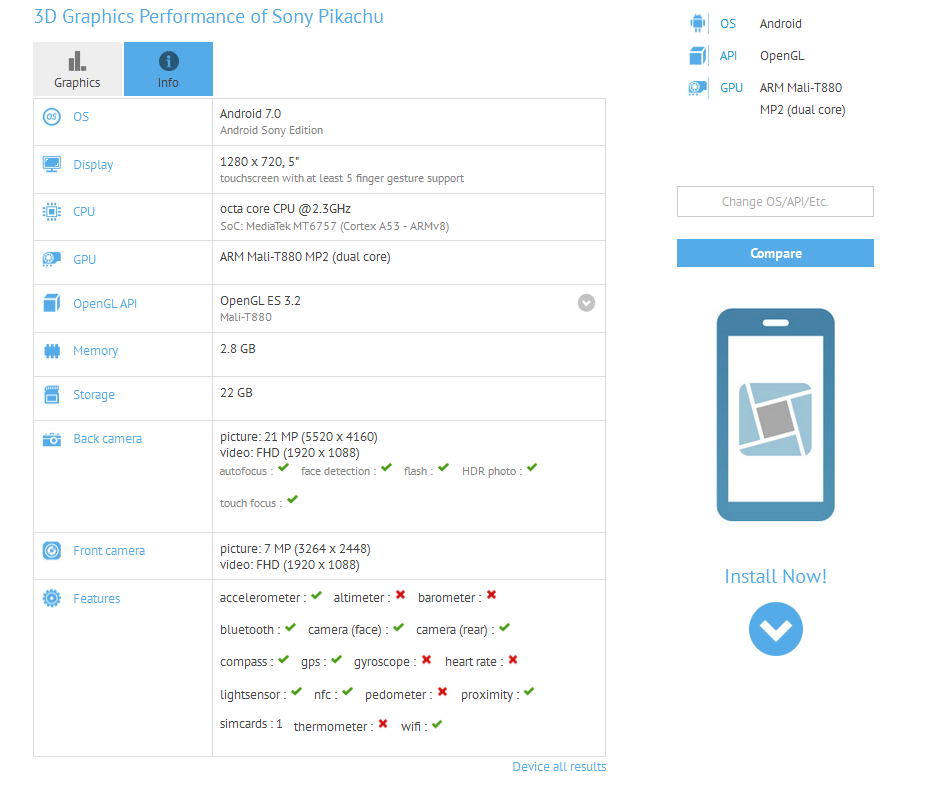 Moreover, Sony Pikachu has a 21-megapixel autofocus camera and a LED flash on its rear panel while an 8-megapixel camera in its front as well. The rear camera has features like autofocus, face detection, flash, HDR photo and touch focus. The GFX listing shows that the device has connectivity features like Bluetooth, GPS, NFC and WiFi. As per the listing, the device has an accelerometer, light sensor, and proximity sensor as well.

While no details about announcement and availability of Sony Pikachu is known at the moment, we expect Sony to most probably launch the smartphone at the upcoming Mobile World Congress event to be held later this month. But since the Mobile World Congress is not so far off now, we should know their detailed specifications very soon. As per reports, the Sony Pikachu might be the Sony G3112 which was leaked last month.

The Sony Xperia phones with model no G3121 and G3112 were spotted in user-agent profile by XperiaBlog. The UAP documents for these devices revealed that both will be powered by MediaTek MT6757 Helio P20 chipsets that feature octa-core processors clocked at 2.3GHz. The chipset combines a 2.3 GHz quad-core and 1.6 GHz quad-core which is coupled with Mali-T880 graphics.

The leaked documents also revealed that Sony G3112 will feature a 1280×720 pixel display while the G3221 will rather come with a full HD 1080×1920 pixel screen display. However, it seems like that the G3112 with its 720p display will belong to the low-end range, while the G3221 will be priced much higher thanks to its better screen resolution.