Sony is reportedly making another Xperia brand smartphone, brand named as Sony C6802, with full high definition display. The Xperia Blog, which reported this, claimed to have spotted the Sony C6802 device running Android 4.2 Jelly Bean at the HTML5Test website. 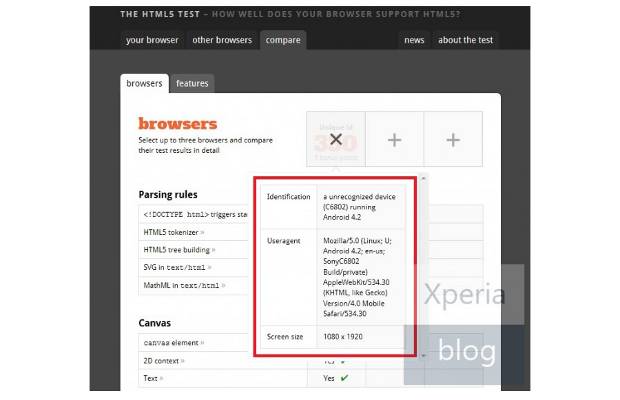 The HTML5Test screenshot listing shows an unknown Sony C6802 smartphone with 1920×1080 pixel resolution display and Android 4.2 Jelly Bean running on it. No other details were available through the listing since it was an HTML5 Test meant for the mobile web browser.

From the listing, it is evidential enough that Sony Mobile is working to bring full 1080p HD display bearing device for this year to compete with other handset makers. Last year, Sony Mobile got bit of heat from the consumers for not working on quad-core smartphones. This year, Sonly Mobile seems to be offering more than one quad-core smartphone after the current Xperia Z.

As of now, there is no official word from the company but do expect to see some announcement by the mid of this year.