Qualcomm has announced the Snapdragon 8 Gen 1 SoC that is based on a 4nm node and has the Cortex-X2 prime core. 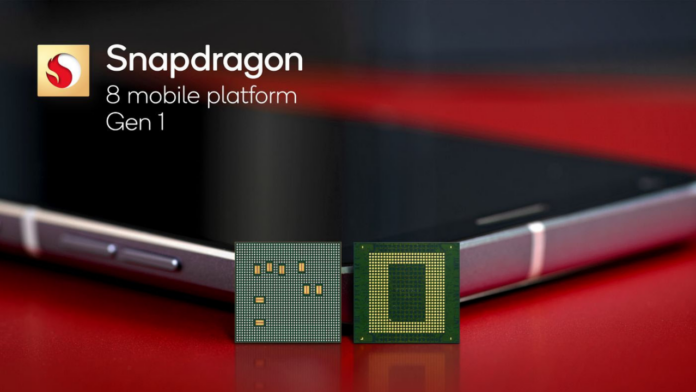 Qualcomm has announced Snapdragon 8 Gen 1 SoC as its 2021 Summit. The SoC is based on a 4nm node and comes with the 7th Gen Qualcomm AI Engine. It also uses the Snapdragon X65 5G Modem-RF System ushering in speeds up to 10 Gbps.

The new CPU is claimed to be 20% faster than its predecessor and 30% less power consuming. The new Adreno GPU promises a 30% performance boost and up to 25% power saving because of the new architecture. There’s an Adreno Frame Motion Engine that will allow the GPU to render a game at double frame rates whilst using the same amount of power. Moreover, the FPS can be maintained even after the power consumption has been cut by half.

Qualcomm has introduced another new feature called desktop-class volumetric rendering along with Variable Rate Shading Pro. This is an image-based VRS that should be making the integration of VRS into more games much easier. Qualcomm says that it has further partnered with some of the largest game developers to ensure their games are optimised best for the hardware.

You get support for 4K and QHD+ displays with up to 144Hz refresh rate, LPDDR5 RAM with a frequency of up to 3200MHz and density of up to 16GB, and Quick Charge 5 fast charging as well.

Qualcomm has focused a lot on the camera capabilities with the Snapdragon 8 Gen 1. The Spectra ISP retains the triple ISP system this time but with support for 18-bit system instead of 14-bit on the Snapdragon 888. You get up to 4,096 times more camera data and up to four additional stops of dynamic range for very bright or very dark scenes. This triple ISP system allows for shooting 240 12-megapixel photos in a single second or simultaneously shooting in 8K with HDR while you capture 64-megapixel photos owing to an increased 3.2-gigapixel per second throughput.

One can now also shoot in 8K video with HDR 10 Plus and Qualcomm is also allowing shooting in 18-bit RAW, of course, only if the camera hardware on your phone allows you to actually do it. There are a bunch of improved AI processing techniques, including improved auto-exposure, auto-focus, and auto-face detection technology. There’s now a dedicated “bokeh engine” that adds portrait effects to 4K video, and an “ultrawide engine” that can de-warp and remove chromatic aberrations from the stills.

Moreover, there’s a new fourth ISP that is located in the dedicated sensing hub on the SoC. This ISP’s primary aim is to power an Always-on camera that can be designed by the developers to work for specific scenarios. With regards to privacy and security concerns, Qualcomm also says that the data that will be captured using the Always-On camera will be processed and will stay locally on-device in the chip’s secure enclave.

Talking about security, Qualcomm has added a hardware-level layer of security with a “dedicated Trust Management Engine”, in addition to offering support for the Android Ready SE standard. The TME is claimed to stay secure even if the security zones above it have been compromised.

As for connectivity, the Snapdragon 8 Gen 1 features an integrated X65 5G modem, which supports both sub-6 and mmWave operation and can deliver theoretical peak speeds of 10 Gbps. The modem also supports carrier aggregation for the uplink which is a first. The chip also supports Wi-Fi 6 and Wi-Fi 6E, Bluetooth LE Audio, and the company’s Snapdragon Sound technology for enabling AptX Lossless wireless audio. Bluetooth LE is also a first for Qualcomm and it can stream CD Lossless Audio wirelessly which is another major advancement.

Xiaomi 12 should be the first smartphone to come with Snapdragon 8 Gen 1 while OnePlus should follow with their 10 series in early 2022. Xiaomi CEO Lei Jun confirmed the model Xiaomi 12 and that it will come with the new chip. The device will be available soon, however, an exact release date wasn’t provided. Leaks suggest that Xiaomi will be introducing the device sometime during this month.

Realme has also confirmed that GT 2 Pro will be among the first devices to come with this chip. Motorola has also scheduled an event for December 9 in China where it could unveil the Edge X30 with Snapdragon 8 Gen 1. Apart from these four, all other major brands including Samsung, Vivo, Oppo, IQOO, Asus should be launching their products equipped with the new SoC in 2022.