MediaTek has announced the Dimensity 9000 SoC for flagship smartphones of 2022. 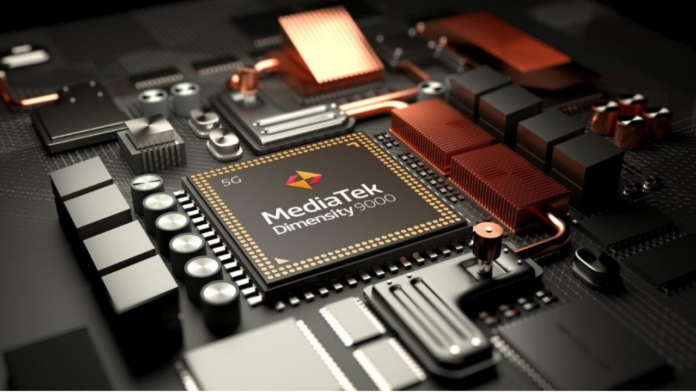 MediaTek has unveiled its flagship processor that will be employed in flagship smartphones of 2022. The processor is called the MediaTek Dimensity 9000 and should be competing with Snapdragon’s upcoming high-end chip for smartphones. In addition, MediaTek also unveiled new Filogic 130, Filogic 130A single-chip solutions for IoT devices.

The MediaTek Dimensity 9000 is made using TSMC N4 (4nm-class) production. The chip is the first to use ARM’s new v9 architecture and has a single Cortex-X2 performance core clocked at 3.05GHz, three Cortex-A710 cores at 2.85GHz, and four Cortex-A510 efficiency cores at 1.8GHz.

For graphics, the chipset sports a 10-core Arm Mali-G710. It is the world’s 1st Arm Mali-G710 MC10 graphics processor with industry’s 1st raytracing SDK using Vulkan for Android. The Dimensity 9000 supports LPDDR5x memory at bandwidths of up to 7,500 Mbps. Moreover, there’s MediaTek’s fifth-generation APU with a total of six cores handling AI processing. It is claimed to offer four times the performance and power efficiency compared to its previous generation.

First set of devices to debut with this processor are expected to launch some time in the first quarter of 2022. There’s no confirmation as to what companies will first be launching smartphones with this chip.

MediaTek Filogic 130 and Filogic 130A system-on-chips (SoCs) both integrate a microprocessor (MCU), AI engine, Wi-Fi 6 and Bluetooth 5.2 subsystems, and a power management unit (PMU) into a single chip.

Filogic 130 and Filogic 130A both support 1T1R Wi-Fi 6 connectivity and dual-band 2.4GHz and 5GHz, along with advanced Wi-Fi features such as target wake time (TWT), MU-MIMO, MU-OFDMA, quality of service (QoS) and WPA3 Wi-Fi security. To ensure that users’ Wi-Fi connectivity remains reliable even when Bluetooth devices are in use at the same time, the solutions support advanced Wi-Fi and Bluetooth coexistence.