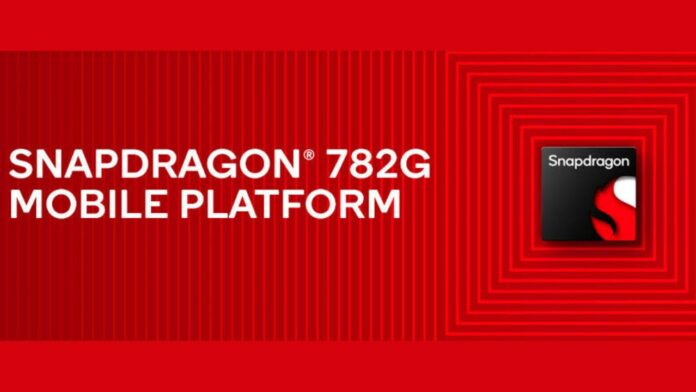 Qualcomm recently unveiled its flagship Snapdragon 8 Gen 2 processor and now, the brand is refreshing its mid-range processor lineup with the Snapdragon 782G which aims to replace the Snapdragon 778G+. However, this makes Qualcomm’s lineup a little bit confusing as it launched the Snapdragon 7 Gen 1 processor earlier this year as highest end 7-series chip which was also the successor to the 778G+.

Compared to the 778G+, the clock speed bump makes the CPU 5% faster, and the GPU 10% faster, says Qualcomm. For connectivity, it gets FastConnect 6700 that supports Wi-Fi 6 up to 2.9, 6 GHz band and integrated Bluetooth 5.2, while the modem is the same Snapdragon X53 with Sub-6GHz and mmWave capabilities.

The processor supports up to 200MP camera resolution. Additionally, it offers Quick Charge 4+ (up to 50% in 15 minutes), Fused AI Accelerator architecture, and the same Qualcomm Spectra ISP with triple 14-bit ISP compatibility. The chip supports FHD+ displays at up to 144Hz refresh rate.

Talking about the recently launched Snapdragon 8 Gen 2, it is based on TSMC’s 4nm node and has an octa-core design. The octa-core design consists of the prime ARM Cortex-X3, clocked at 3.19GHz. Then there are two A715 cores and two A710 cores which are the performance cores. Finally, there are three A510R1 cores as efficiency cores. What’s unusual here is the core layout, which is 1+4+3 in comparison to 1+3+4 which we see in most chips.