Intex and Gionee have also announced to bring their own smatphones with this processor next year.

The handset, named as Smart Namo Saffron OctaCore, comes with a huge 5.7 inch touchscreen with high definition display. It will have the Mediatek’s recently announced MTK6592 octa core processor. Even Intex and Gionee have announced to bring their own smatphones with this processor next year.

Meanwhile, Smart Namo said that the Saffron OctaCore will have 2 GB RAM and 32 GB ROM. It will also have 13 megapixel rear camera and an 8 megapixel front camera. The phone will be pre-rooted which will grant users super user facility and one can use a lot of applications on this phone which is not otherwise permitted on non-rooted phones. 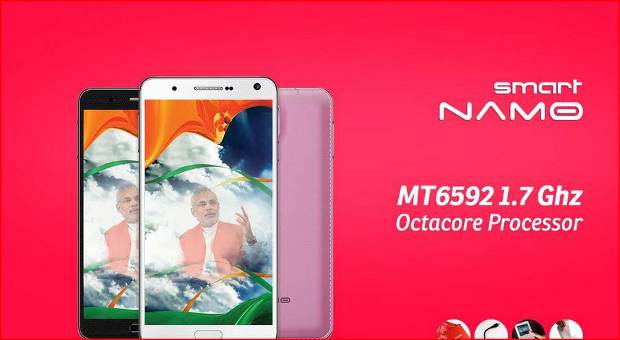 The Smart Namo Saffron OctaCore is said to have a 2800 mAh battery and NFC as well. Smart Namo said that the phone will be listed on Snapdeal for USD 315 (Rs 19574 approximately).

As of now Snapdeal is only offering Smart Namo Saffron One (16 GB) white. Its 32 GB version is sold out on pre-booking itself as does the 16 GB black version, as per the listing on Snapdeal.