Images leaked showed the smartphone with Galaxy SIII like design but without the home button.

Samsung has been reportedly developing the Galaxy S III successor handset, which is likely to be branded as Galaxy S IV. SamMobile claims to have received an exclusive press shot of the Samsung Galaxy S IV along with other details. The Samsung Galaxy S IV will feature 4.99-inch full HD display and will house a quad-core Exynos family mobile processor. This smartphone will run Android 4.2.1 Jelly Bean out of the box.

As The Mobile Indian reported reported earlier, the Galaxy S IV might come with S Pen. The Galaxy S IV will feature 4.99-inch full HD Super Amoled display supporting 1920×1080 resolution natively. Under the chassis, the smartphone will pack a quad-core Samsung Exynos 5450 mobile processor, clocked at 2 GHz, with Mali-T658 graphics chip. To compliment this core chipset, Samsung may add 2 GB RAM to run the Android 4.2.1 Jelly Bean update smoothly. In all fairness, this smartphone will be as powerful as the computers that were sold in early years of last decade. 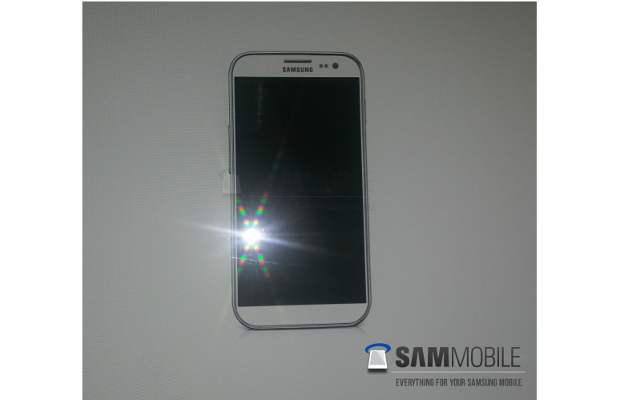 Interestingly, as per the images, Samsung has removed the home button and use the on-screen buttons in the user interface. Design of the smartphone is quite similar to that of Galaxy S III. These details are quite premature and we take them with a grain of salt.