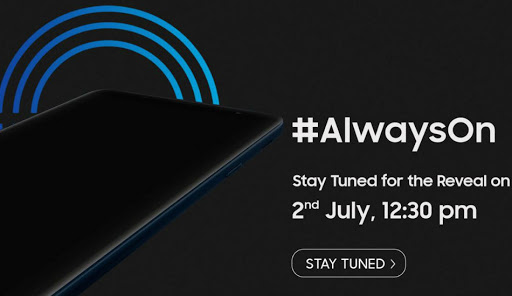 The new device will come loaded with Super AMOLED display and it will be backed by a 4GB of RAM and 64GB of internal storage. It will be powered by Samsung Exynos processor.

Samsung is gearing up to launch a new smartphone under its Galaxy On series in India on July 2. The new ‘Galaxy On’ smartphone with Infinity Display was earlier also reported to be launched in the first week of July.

Flipkart has teased the smartphone launch of the smartphone in India on July 2. The ‘#AlwaysOn’ hints that the new device will be a part of the Galaxy On-series. The Flipkart listing has confirmed the launch of the new On series smartphone on July 2 at 12.30 P.M. The listing is accompanied by various hashtags like #StyleAlways, #SpeedAlways, #TrustAlways #DoMoreAlways and a video of Tiger Shroff in which he is shown holding a mystery Samsung device. The teaser on Flikart has revealed that the smartphone will be a Flipkart exclusive model.

With the launch of this new On series smartphone, Samsung will be announcing a phone under the series after a long time. Samsung last launched Galaxy On7 Prime in this series in January this year. The Samsung Galaxy On7 smartphone was launched in two memory variants – 3GB of RAM with 32GB internal memory and 4GB of RAM with 64GB internal memory priced at Rs 12,990 and Rs 14,990 respectively.

As per a recent report, the new device will come loaded with Super AMOLED display and it will be backed by a 4GB of RAM and 64GB of internal storage. It will be powered by Samsung Exynos processor.

Samsung has been seeing a downward graph when it comes to bringing new features to its budget and mid-range smartphones. In the recent past, we have seen phones like Galaxy J6 and Galaxy J8 that offers new display trend, however, the resolution is particularly sub-standard as compared to what brands like Xiaomi, Asus and Realme are offering at a similar price point.