Samsung Mobile Fest is now live on Amazon: Here are the top deals

The Samsung Galaxy On5 Pro is now available for Rs 7,190 during the fest, down from its original price of Rs 9,990. The users will be getting up to Rs 6,444 off on exchange of smartphone. To recollect the specifications, the Samsung Galaxy On5 Pro has a 5-inch HD (1280 x 720 pixels) IPS display, a 1.3 GHz quad-core Exynos 3475 processor, Mali-T720 GPU, 2GB of RAM, 16GB internal memory and 128 GB micro SD card slot. The smartphone runs on Android 6.0 Marshmallow operating system and comes with a 2600 mAh battery. 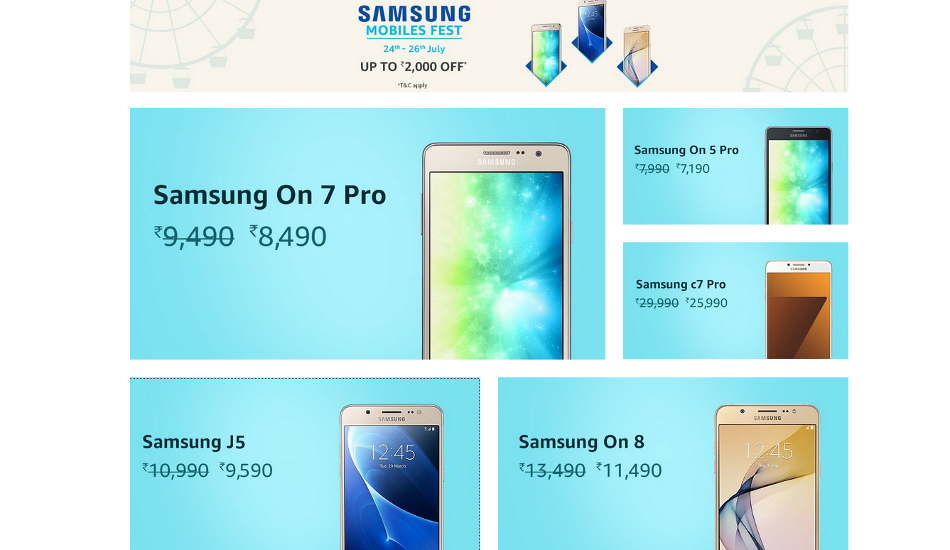 Samsung Galaxy C7 Pro is available for a discounted price of Rs 25,990 after a discount of Rs 4,000. One can get up to Rs 17,600 off on exchange offer. The device is also available for no cost EMIs if you checkout only with this item. The Samsung Galaxy C7 Pro offers a 5.7-inch display with full HD (1920 x 1080 pixels) Super AMOLED display. It is powered by a 2.2 GHz octa-core Snapdragon 625 processor and Adreno 506 GPU. The phone has 4GB RAM, 64GB of internal storage, 256GB expandable memory slot, Android 6.0.1 Marshmallow operating system and a 3,300 mAh battery with Qualcomm Quick Charge 3.0. The device also features a fingerprint sensor which is embedded in the physical home button in the front. Moreover, the Galaxy C7 Pro has Samsung’s Always-On display and supports Samsung Pay.

The Galaxy C7 Pro flaunts a 16-megapixel shooter on the back and a 16-megapixel camera at the front with f/1.9 aperture. Both the cameras can record full-HD videos at 30 frames per second. On the connectivity front, the device offers hybrid Dual SIM, 4G LTE, WiFi, Bluetooth 4.2, GPS, NFC and a USB Type-C port. The handset measures 156.5 x 77.2 x 7.0 mm and weighs 172 g. The smartphone also has acceleration sensor, a gyro sensor, a geomagnetic sensor, proximity sensor and RGB light sensor.

The Samsung Galaxy J5 (2016) has a 13-megapixel autofocus camera and a LED flash in its rear panel while a 5-megapixel camera is in its front. The camera features include CMOS, f/1.9, Auto Focus, Beauty Face, Continuous Shot, Interval Shot, Panorama, Sports Mode, Sound and Shot Mode, and Zoom support. Besides this, the smartphone offers 4G, Bluetooth, GPS, WiFi, NFC and a Micro USB port. The phone measures 145.8 x 72.3 x 8.1 mm and weighs 158 grams.

Lastly, Samsung Galaxy On8 is now available at a price tag of Rs 11,490 as opposed to the original price of Rs 15,900. The company is also offering up to Rs 9,999 off on exchange offer. The offer is valid only on black and the gold colour variant, the white colour variant is currently unavailable.

To recollect, Samsung Galaxy On8 was launched in India in September last year. It has a metal unibody with diamond cut metal frames. The smartphone has a 5.5-inch Super AMOLED full HD (1920 x 1080 pixels) display and comes equipped with 1.6GHz Octa-Core Exynos 7580 processor. The smartphone runs on Android 6.0 Marshmallow operating system and gets its strength from a 3300 mAh battery.

The Galaxy On8 has 3GB of RAM, and 16GB internal memory, which can be further expandable up to 128GB with a microSD card. The smartphone flaunts a 13-megapixel shooter on its rear and 5-megapixel snapper on its front panel for selfies and video chats. Both the camera comes with LED flashlight. Besides, the smartphone offers Dual SIM, 4G with VoLTE, NGC (UICC), WiFi (802.11n), Bluetooth 4.1, GPS, a micro USB port. Moreover, the smartphone also comes with UDS (Ultra Data Saving) mode and S bike mode. The handset measures 151.7x76x7.8 mm and weighs around 169 grams. The sensors include Accelerometer, Proximity, and Hall.