Here’s our first look at the Galaxy Z Flip4 specifications. 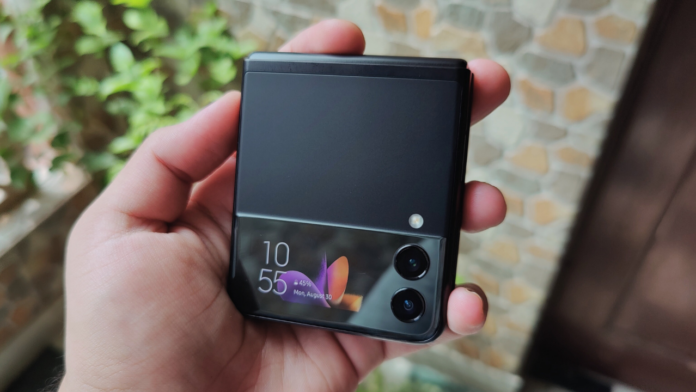 A few days ago, we got one of the first major leak for the upcoming Galaxy Z Fold4 which revealed the detailed specifications for the foldable and now, its time for Galaxy Z Flip4. The upcoming clamshell style folding smartphone from Samsung has now been leaked in detail.

Tipster Yogesh Brar has tipped the specifications of the Galaxy Z Flip4 on Twitter, as per which this foldable will also have two displays, like its predecessor. On the front, it will come with a 2.1-inch sAMOLED display. It should feature a 6.7-inch FHD+ Dynamic AMOLED foldable main display. It may have the same a 2640 x 1080 pixels resolution, 425ppi pixel density, and Corning Gorilla Glass Victus protection like the Z Flip3. Further, the leak says it will have a 120Hz refresh rate.

This phone will be powered by the Snapdragon 8+ Gen 1 SoC with 8GB of LPDDR5 RAM and up to 256GB of UFS 3.1 storage. The Galaxy Z Flip4 should come with a dual-camera setup identical to Z Flip3. It includes a 12-megapixel sensor with purported support for OIS and a 12-megapixel ultra-wide-angle lens. On the inside, it will sport a 10-megapixel front-facing sensor.

The Samsung Galaxy Z Flip4 will be backed by a larger 3,700mAh battery in comparison to 3300mAh on Z Flip3, with 25W charging, 10W wireless charging support and reverse wireless charging support. Connectivity options may include 5G, LTE, Bluetooth 5.3, NFC, and a USB Type-C port for charging. The Z Flip4 will most probably run on OneUI 4.1 based on Android 12. There’s should be side-mounted fingerprint scanner for security.