The Samsung Galaxy Star Pro has Android Jelly Bean 4.1 operating system with Samsung's new Motion user interface, layered on top of it. The handset is powered by a 1 GHz single core processor which is based on ARM Cortex A5 architecture and is assisted by a 512 MB RAM. There is 4 GB of onboard storage in the Galaxy Star Pro as well of which nearly 2 GB would be available for users. You can though expand its memory to up to 32 GB using a micro SD card. 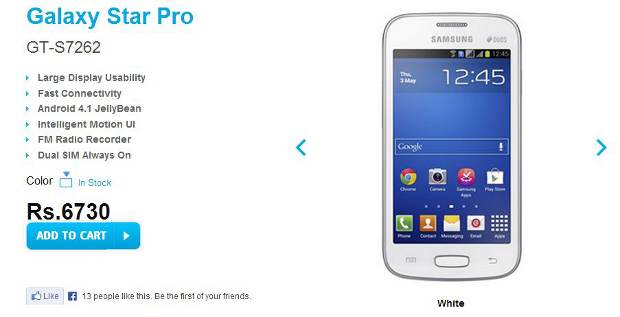 For imaging there is a 2 megapixel fixed focus camera in the Samsung Galaxy Star Pro that is capable for recording videos at 15 frames per second. It has though no front facing camera. The Samsung Galaxy Star Pro has WiFi, Bluetooth and USB connectivity as well. For multimedia the device along with audio video player gets stereo FM with recording functionality as well. The device is powered by a 1500 mAh battery which should provide 1-2 days' worth of usage.

Samsung introduces e-catalogue for its products

Samsung India launches 'Reward Yourself' program: Here are the offers