The possible younger sibling to the Galaxy S9 will feature a 5.8-inch Quad HD+ screen with dual rear cameras and Android Oreo.

Just after surfacing on Chinese certification website TENAA, the Samsung Galaxy S9 Mini has now again surfaced online. This time the smartphone has been spotted on another benchmarking website, Antutu with the same model number SM-G8850 which appeared on TENAA. The listing has revealed some of its major specifications.

As per the listing on AnTuTu benchmark, the Galaxy S9 Mini comes with a Full HD+ (2280 x 1080 pixels) display meaning it will be an 18:9 display but the screen size is not known. Besides, the listing says that the handset has Qualcomm’s Snapdragon 660 SoC, Adreno 512 GPU, and Android 8.0.0 Oreo operating system. It will come with 4GB of RAM and 64GB of internal storage. The listing has no information about its battery size and camera resolution. Additionally, the AnTuTu listing reveals the benchmark score of 136483 points of the Galaxy S9 Mini. 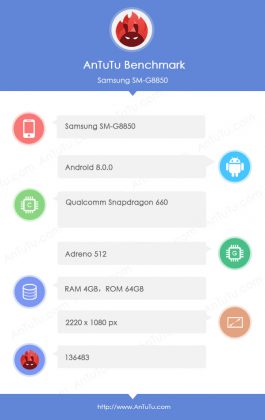 As per the TENAA listing, the smartphone will come with a 5.8-inch Super AMOLED Quad HD+ screen, just like the one on the Galaxy S9 with a resolution of 2960 x 1440 pixels. The list reveals that the Galaxy S9 will be powered by Samsung’s own Exynos 9810 SoC and a Mali G72MP18 graphics unit with 4GB and 6GB RAM options. There has been no mention of the storage available onboard the S9 Mini but the device will have an option to expand to 400GB with the help of a microSD.

The SM-G8850 is slated to feature a 12MP+12MP dual cameras at the back with an 8-megapixel autofocus front-facing snapper which a wide-angle lens. The device runs on the latest Android 8.0 Oreo interface and is dust and water resistant due to its IP68 rating. In terms of connectivity, the potential Galaxy S9 Mini will feature 4G VoLTE, Bluetooth v5.0, Fi 802.11ac (2.4/5GHz), NFC and GPS. The S9 Mini will be powered by a smaller 3,000mAh battery but will still come with fast charging which has been the norm.