The Samsung Galaxy S7 Active was originally launched with Android 6.0.1 Marshmallow operating system. After the update, the smartphone will have all the goodies of Android Oreo with Samsung Experience 9.0. Users will get picture-in-picture mode that lets users to two tasks simultaneously.

The Samsung Galaxy S7 Active which was launched in the USA in the year 2016 has now been spotted on the website of Wi-Fi Alliance with the Android Oreo operating system. This means that Samsung is perhaps testing the latest software and may release the same for the device soon. 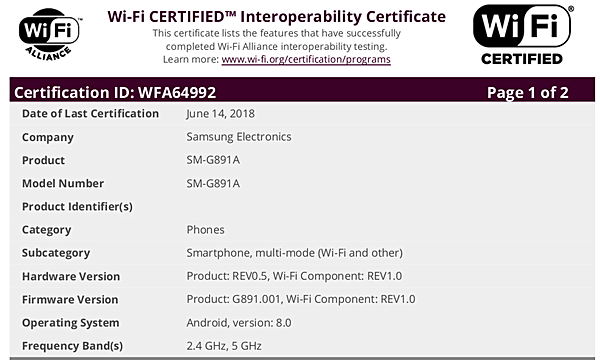 The device was originally launched with Android 6.0.1 Marshmallow operating system. After the update, the smartphone will have all the goodies of Android Oreo with Samsung Experience 9.0. Users will get picture-in-picture mode that lets users to two tasks simultaneously. So, for example, one can minimize a YouTube video while sending a text message or writing an email. Android Oreo has other features like including Background limits, installation of apps via APK, over 60 new emojis, notification dots, Wide-gamut colour for apps, Snoozing individual notification, Adaptive icons, Keyboard navigation, WebView enhancements and much more.

Recently, Samsung rolled out the Android 8.0 Oreo for its flagship devices, the Galaxy S7 and Galaxy S7 Edge in India.