Samsung Galaxy Unpacked event will be held on February 11 in San Francisco where it is expected to launch the upcoming Galaxy S20 series. The S20 series will be including smartphones like Galaxy S20, Galaxy S20+ and Galaxy S20 Ultra. Now Galaxy S20+ 5G variant has been spotted on Geekbench which reveals the key specifications of the upcoming phone.

As per the GeekBench listing, the upcoming Samsung smartphone carries model number SM-G986U. The listing reveals that the phone will run on Android 10 software and it will be powered by the octa-core SoC that has a base frequency of 1.80GHz. The phone is powered by a processor that is mentioned as ‘kona’ which is the codename of the Snapdragon 865 mobile platform 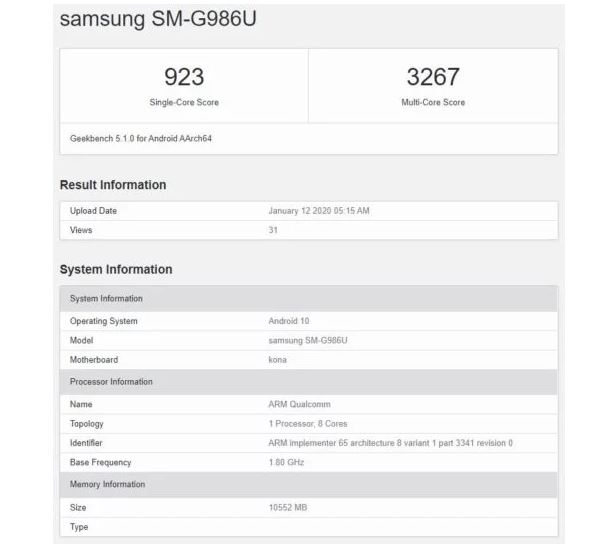 The Galaxy S20+ is likely to sport a 6.9-inch S-AMOLED display with Infinity-O design.  The phone could be housing a 5,000mAh battery and it might feature a quad camera setup with a 108-megapixel primary sensor.

Alongside, Galaxy S20 series, Samsung will also announce its clamshell foldable phone called Samsung Galaxy Z Flip. The Galaxy Z Flip will be powered by an older Qualcomm Snapdragon 855 processor. The phone is expected to feature a punch-hole design and it should run Android 10 based on OneUI out of the box.