The smartphone is expected to run Android 7.0 Nougat operating system.

The Samsung Galaxy On7 Pro 2017 which recently received Federal Communications Commission (FCC) certification is now Bluetooth certified with version 4.2 from the Bluetooth Special Interest Group (SIG). Sadly, the listing does not reveal anything about the hardware specifications of the smartphone. It is now expected that the smartphone will be launched very soon. 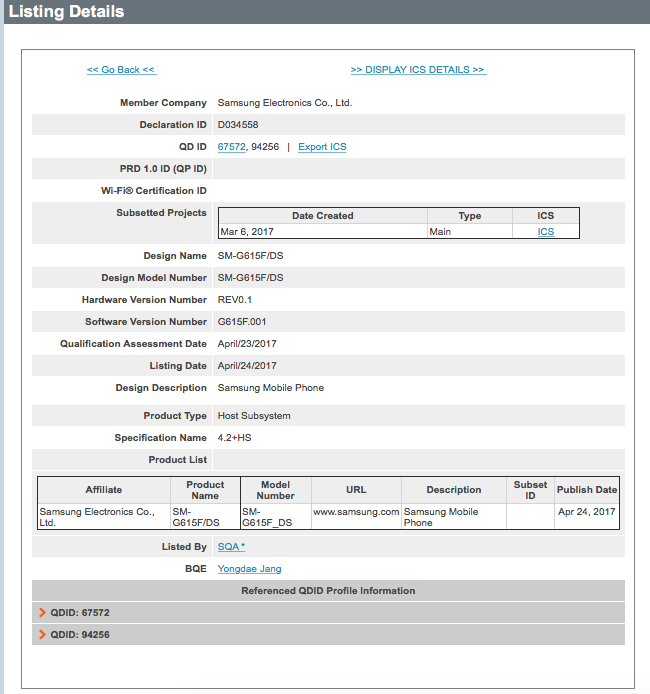 In addition to this, the device has already received WiFi certification from the WiFi Alliance (WFA). We already know the expected specs of Samsung Galaxy On7 Pro 2017 as the smartphone has earlier been spotted on GFXBench and GeekBench benchmarking websites with the model number Samsung SM-G615F. The latest Bluetooth certification listing has also same model number Samsung SM-G615F.

As per earlier multiple listings, Samsung Galaxy SM-G615F has a 5.7-inch full HD display with 1920×1080 pixels resolution and 5 finger gesture support. It is powered by MediaTek Helio P20 MT6757 octa-core processor clocked at 2.3 GHz along with 3GB/4GB of RAM and 32GB of internal storage. Besides, it has Mali-T880 GPU and runs Android 7.0 Nougat operating system.

Samsung Galaxy SM-G615F has a 13-megapixel autofocus camera and a LED flash on its rear panel and a same 13-megapixel camera is included for the front as well. The Wi-Fi certification showed that the Samsung Galaxy On7 Pro 2017 will support dual-band Wi-Fi a/b/g/n (2.4GHz,5GHz) and Wi-Fi Direct connectivity features.