The smartphone will be exclusively available on Amazon India.

Samsung Galaxy On7 Prime is said to be launched on January 17 in India. Now ahead of the launch, the smartphone has been spotted on GFXBench benchmarking website. The GFX listing confirms the specs which we have already seen in the earlier Amazon listing except for memory storage. The smartphone will be exclusively available on Amazon India. 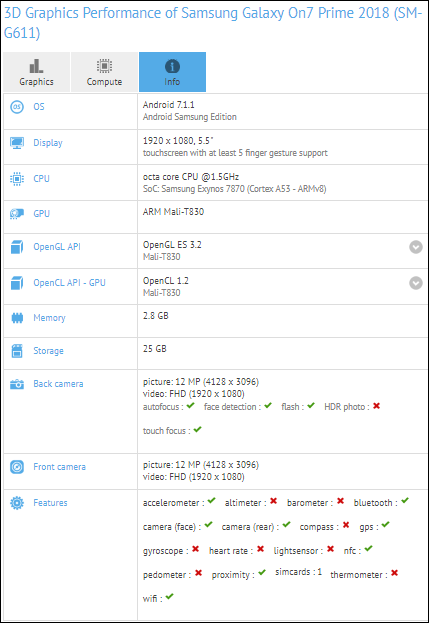 As per the listing on GFXBench, Samsung Galaxy On7 Prime has a 5.5-inch display that has full HD (1920×1080 pixels) resolution and 5 finger gesture support. Besides as per the listing, it has 1.5GHz octa-core processor with Mali -T830 GPU. The smartphone has 3GB RAM with 32GB internal storage out of which 25GB is reserved for users. The smartphone runs on Android 7.1.1 Nougat operating system. In the listing, there is no information about its battery or expandable memory.

Further, the Galaxy phone is listed with 13-megapixel autofocus camera and a LED flash in its rear panel. There is a same 13-megapixel camera in its front for selfies. The GFX listing shows that the device has connectivity features like Bluetooth, GPS, NFC and WiFi. As per the listing, the device has an accelerometer, light sensor and proximity sensor as well.

As per the earlier listing on Amazon, the Samsung Galaxy On7 Prime has a full metal unibody and a 5.5-inch full HD (1080 x 1920 pixels) display. It is powered by a 1.6 GHz octa-core Exynos 7870 processor. The smartphone will have two memory variants – 3GB of RAM with 32GB internal memory and 4GB of RAM with 64GB internal memory, both supporting 256 GB expandable memory via micro SD card slot. The listing does not reveal the operating system but it is expected that it will run on Android 7.1.1 Nougat operating system. The Galaxy On7 Prime boasts a 13-megapixel rear camera and a same 13-megapixel front camera with f//1.9 aperture. For connectivity features, the smartphone will likely offer Dual SIM, 4G with VoLTE, WiFi (802.11 b/g/n), Bluetooth 4.1, GPS/ GLONASS, and a micro USB 2.0 port.