Three live images along with an alleged press render of the device have appeared on Chinese microblogging site, Weibo, which shows vertically aligned dual-camera setup at the rear.

A 3D-printed prototype of the upcoming Samsung Galaxy Note 8 is doing rounds over the internet. Three live images along with an alleged press render of the device have appeared on Chinese microblogging site, Weibo, which shows vertically aligned dual-camera setup at the rear.
The image also shows the handset next to the Galaxy S6 Edge Plus, which suggest that the smartphone will boast a bigger size as compared to the Samsung last year’s flagship device. However, it is important to note that the smartphone showcased in the image is just a dummy and the actual design might be completely different. Moving on, the dummy model shows vertically aligned dual-camera setup at the back and interestingly, there is no fingerprint sensor at the back or front, which could mean that the phablet might come with a fingerprint sensor embedded under the display. 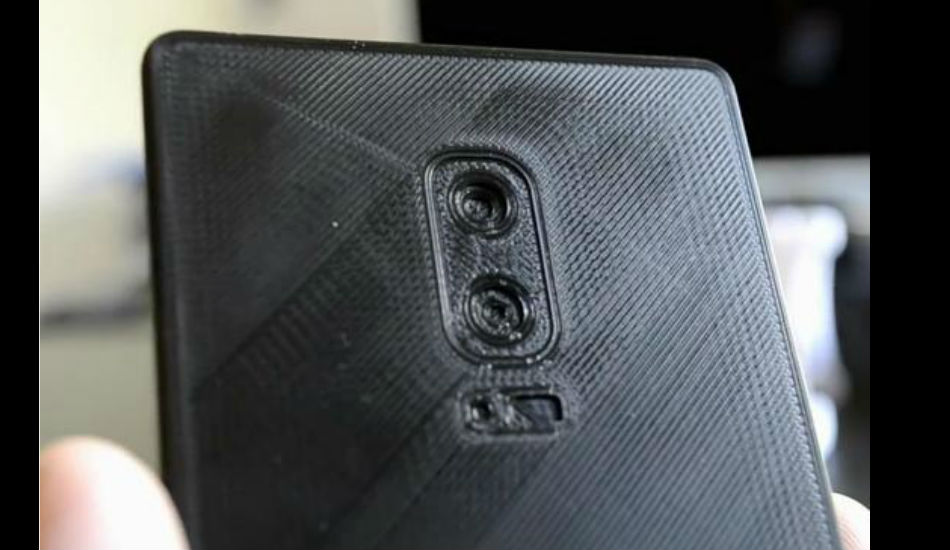 Although we have seen many leaks talking about Galaxy Note 8 being the first from Samsung to boast a dual-camera setup, it is Samsung Galaxy C10 that will be the first model to feature dual lenses.
Recollecting some previous reports, the Galaxy Note 8 will sport a massive 6.3-inch screen. It is highly likely that it will boast an Infinity Display coupled with a Quad HD+ display, which is found in the latest flagship device, the Samsung Galaxy S8 and Galaxy S8+, and will follow a similar 18:5:9 aspect ratio.
The phone will come with no side bezels and minimum top and bottom bezels just like we have seen on the Samsung’s latest flagship devices. Multiple reports also suggest that it will be powered by the Qualcomm’s top-of-the-line Snapdragon 835 processor and there might an Exynos variant as well. The device is also reported to sport a 6GB of RAM and a massive 256GB of internal storage.
On the camera front, it is reported that Galaxy Note 8 will sport dual-camera setup, with a combination of 12MP and 13MP cameras. Meanwhile, Ming-Chi Kuo, an analyst at KGI Securities, claims that the device will have a 12-megapixel wide-angle CIS (CMOS image sensors) supporting dual photodiode to absorb more light for better low-light shots and a 13-megapixel telephoto CIS with dual 6P technology and supporting 3X zoom. Both the sensors support Optical Image Stabilisation as well. The phone will likely sport a 3600mAh battery with fast and wireless charging. It will run on the latest Android 7.1.2 Nougat.