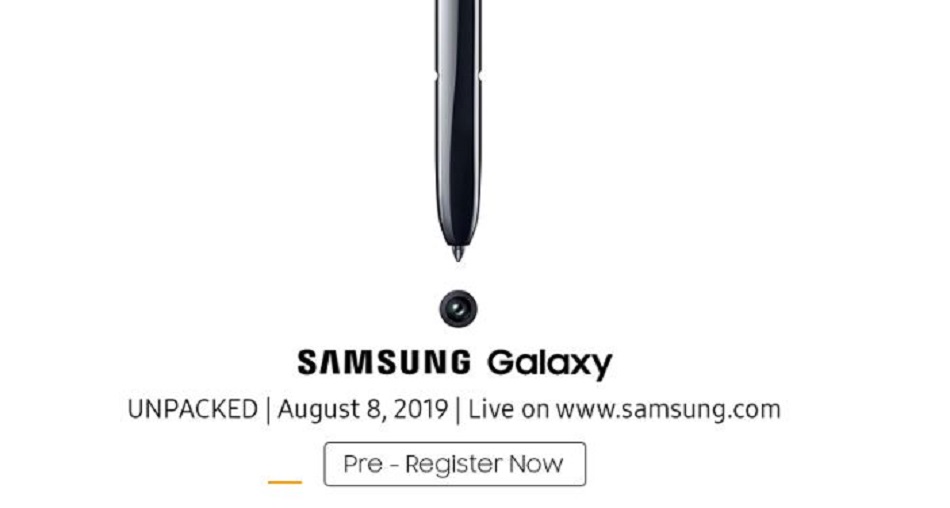 South Korean giant Samsung is all set to launch its flagship Galaxy Note 10 series on August 8th. The pre-registration page is now live on Samsung India website. The global unpacked event will take place on 8th August at 1:30 AM (IST) onwards.

As per earlier leaks and reports, Samsung is expected to launch Galaxy Note 10, Galaxy Note 10 5G and Galaxy Note 10+ smartphones at the launch event. Further, the company will launch only the 5G variant of the Galaxy Note 10 in South Korea, while the international market will get both the 5G and 4G models.

The Galaxy Note 10 will reportedly feature a 6.28-inch 2K AMOLED display and it is said to feature 4170 battery with 45W fast charging. In India, the phone will be powered by the Exynos 9825 SoC, while US/Europe variants will have Qualcomm Snapdragon 855 chipset, coupled with 8GB/12GB of RAM. The phone will run on Android 9.0 Pie operating system and will have 256GB of the internal storage for the base variant.

The Galaxy Note 10 Plus will come with a relatively larger 6.75-inch screen with 1440 x 3040 pixels resolution and 19:9 aspect ratio and to be powered by either a Qualcomm Snapdragon 855 SoC or an Exynos 9820 SoC. The device might have four rear cameras, 12GB of RAM, UFS 3.0 flash storage, and a 4,500mAh battery along with a 45W charger. As perUS FCC listing, it looks likeGalaxy Note 10+ will not feature any 3.5mm audio jack and Bixby button. Further,It will sport dual-band Wi-Fi 6, previously known as 802.11ax, and Bluetooth v5.

Earlier, Samsung Indonesia had tweeted a short video teaser about the Galaxy Note 10 which show how the upcoming Note device will replace the need of using multiple devices for different purposes. The video also shows how users can switch from one device to another, to perform different tasks. Further, Galaxy Note 10 can become a computer using the DeX mode and give the user an enhanced desktop-like experience through the new device.

Moreover, as per reports, Samsung will also unveil Wireless Charging Stand EP-N5200 supporting 20W wireless charging that will succeed the existing EP-P5200 that was unveiled alongside Galaxy S10 phones.