Samsung Galaxy M30s vs Realme XT vs Mi A3: Different formulas for the same price 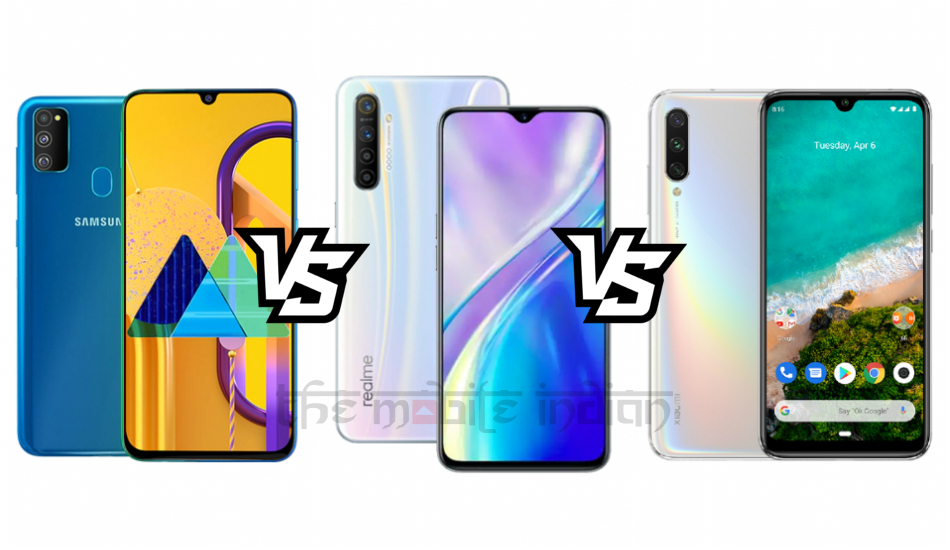 Samsung has just announced the Galaxy M30s in India for a starting price of Rs 13,999. For around the same price, Realme and Xiaomi sell the Realme XT and Mi A3 smartphones respectively. Which one of these three would you buy for around Rs 15,000?

Which one of these three smartphones would you buy in you were in the budget of around 15K? 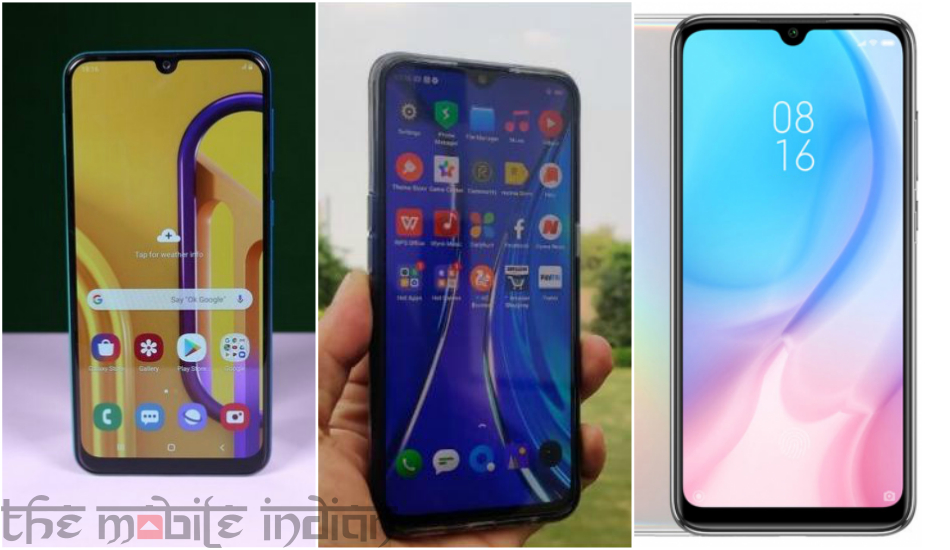 The Galaxy M30s and Realme XT both come with the same sized 6.4-inch Full HD+ AMOLED display and waterdrop notches but with different screen-to-body ratios of 91 percent and 84.7 percent respectively. The Realme XT additionally comes with Corning Gorilla Glass 5 protection while the Galaxy M30s does not. Both Realme XT and Galaxy M30s come with 420-430nits brightness, which makes them ideal for outdoor usage. The Galaxy M30 offers a slightly higher pixel density of411 ppi (1080 x 2400 pixels) in contrast to the402 ppi (1080 x 2340 pixels) density on the Realme XTowing to the larger screen real estate.

As for the Mi A3, while the device does feature an AMOLED screen, the display is relatively smaller at 6.01-inch and only has an HD+ resolution of 720 x 1560 pixels. There is, however, aGorilla Glass 5 protection on the front and the display has363 nits brightness,286 ppi density and80.3 screen-to-body ratio. 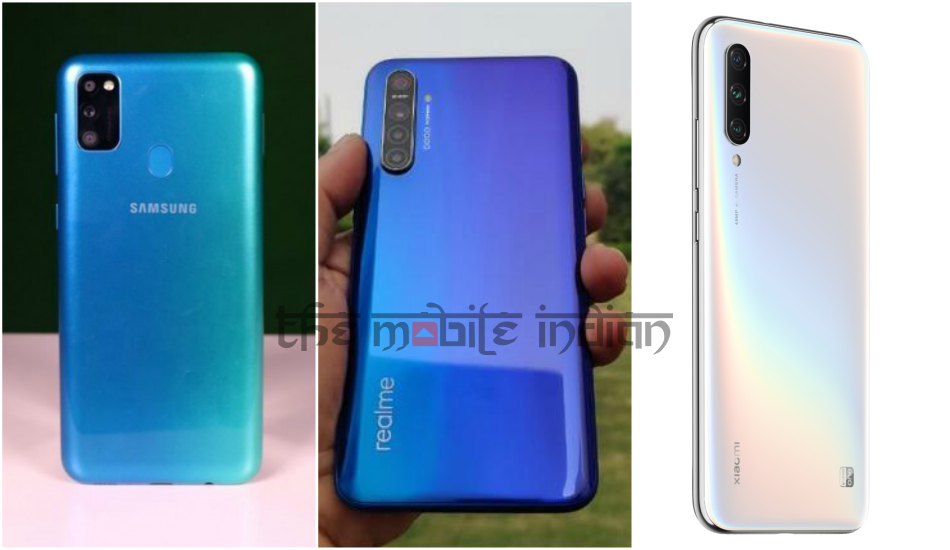 The Galaxy M30s comes with a different gradient finish in Sapphire Blue, Pearl White and Black colour options. The Sapphire Blue variant that we received comes with a polycarbonate finish at that back with different hues of blue transitioning from left to right. All the major features are located on the top half of screen including the fingerprint scanner, the rectangular camera module and the Samsung logo.

Realme’s XT comes in a Pearl Blue and Pearl White which we both have in pictures. The finish on the backside is a glossy glass which should give users a premium feel and it’s also protected by Gorilla Glass 5.

Mi A3 like any phone in the market comes with a glass sandwich design jammed together using an aluminium frame. The back of the phone offers Gorilla Glass 5 and offers a mirrored finish which reflects light in different ways. The phone is available in More than White, Not just Blue and Kind of Grey colours.

For a budget to mid-range phone, a lot of the phone’s buying aspects comes down to how long the phone can last for.While glass panels on a smartphone might offer a premium look, apolycarbonate offers resistance toshatter, scratch or dent. In case, a phone with apolycarbonate does shatter, the cost of repairs on such a device will be relatively cheaper than that of a glass body. So, if premium look and feel isn’t your priority, a polycarbonate back on the smartphone, in this case, the Galaxy M30s, will get you lasting in the long run.

Xiaomi’s Mi A3 is the only phone to be powered by the previous generation 11nm-based chipset which is the Snapdragon 665. The chipset offers lower mid-level performance with a peak clock speed of 2GHz, up to 6GB RAM and 128GB storage.

The Realme XT offers a faster Snapdragon 712 processor built on a 10nm architecture and clocked at 2.3GHz. it’s coupled with 6GB of RAM and 64GB storage (on part with the 6GB+128GB config of M30s).

While Exynos processors are generally considered slower than their Snapdragon counterpartsfor relying on older architecture, the Exynos 9611 on the Galaxy M30s begs to differ. The chipset offers four Cortex-A73 cores clocked at 2.3GHz instead of the two Kryo 360 cores clocked at 2.3GHz on the Snapdragon 712, making it faster. The same cannot be said about the graphics as the Adreno616 on the Realme XT is more powerful than the Mali-G72 MP3 GPU.The Galaxy M30s is available with 4GB/6GB RAM and 64GB/128GB storage.

The Galaxy M30s comes with a triple camera setup comprising of a 48MP primary, 8MP wide-angle and 5MP depth sensor. Thesmartphone captured some good photos in daylight condition in our brief testing period, with colours close to the source and good detailing. The only area where the camera struggles is under low light but that’s where thewide-angle lens comes as a saviour and manages to capture more light in dimly lit conditions.

The Mi A3 comes with a similar camera module but with a lowly 2MP depth (instead of 5MP on the M30s) camera for portraits. 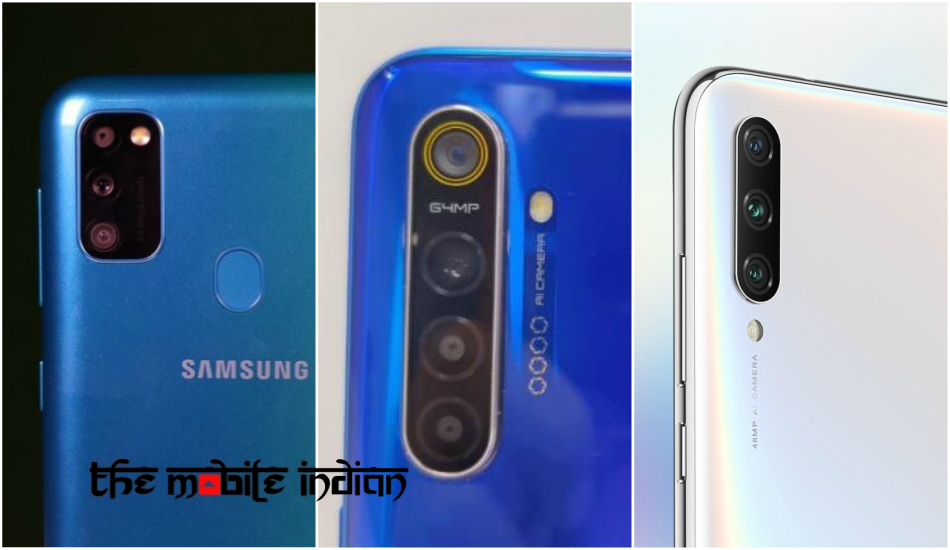 It’s the Realme XT which outshines its competition in the camera department which is powered by a 64MP Samsung ISOCELL Bright GW1 sensor, an 8MP wide-angle lens, a 2MP macro lens and a 2MP depth sensor. In our testing, the Realme XT captured good daylight pictures with more details captured when switching to theWide Angle lens. There’s an additional macro lens at the back which can capture details on subjects in close range while the depth sensor clicks good portrait shots with excellent edge detection.

As for selfies, the Mi A3 is the only smartphone to offer a 32MP front camera with HDR support. The Galaxy M30s and Realme XT feature a 16MP selfie camera inside the waterdrop notch each.

The Realme XT runs Color OS 6.0 based on Android 9 Pie and offers an app drawer for opening apps quickly. While the interface has some bloatware, the device comes with a promised upgrade to Android 10.There are gesture-based navigation controls, anAlways-on screen andSplit-screen multitasking. However, the device comes with a handful preinstalled apps includingDailyHunt, Opera News, UC Browser, Amazon Shopping, Helo and Paytm. Fortunately, all these apps can be deleted from the phone. There arecompany-owned applications like music, video, phone manager, game space, game center and more which can not be deleted.

The Galaxy M30s runs on Android 9.0 Pie based on OneUI which for starters is smoother than the software on older Galaxy phones. The UI is enabled with analways on display feature, ahomescreen with an app drawer, large colourful icons for easier access,Night mode,power modes for battery saving andDigital wellbeing to notify how much you spend on your phone. Then there’s asmart pop-up view that allows viewing notifications in a pop-up window anddual messenger support.

The Mi A3 runs on a clean version of Android 9 Pie because it comes under Google’s Android One initiative. The interface resembles that of the Google Pixels with a notification shade, quick toggles, Pie task switcher and a pill-like button in the centre. All preloaded apps are handled by Google including Music, movies, Files and Drive.

The presence of a clean stock Android 9 Pie gives the Mi A3 a clear win over its competitors. What else? The Mi A3 will also get guaranteed Android updates to up to two years and security updates for three years. 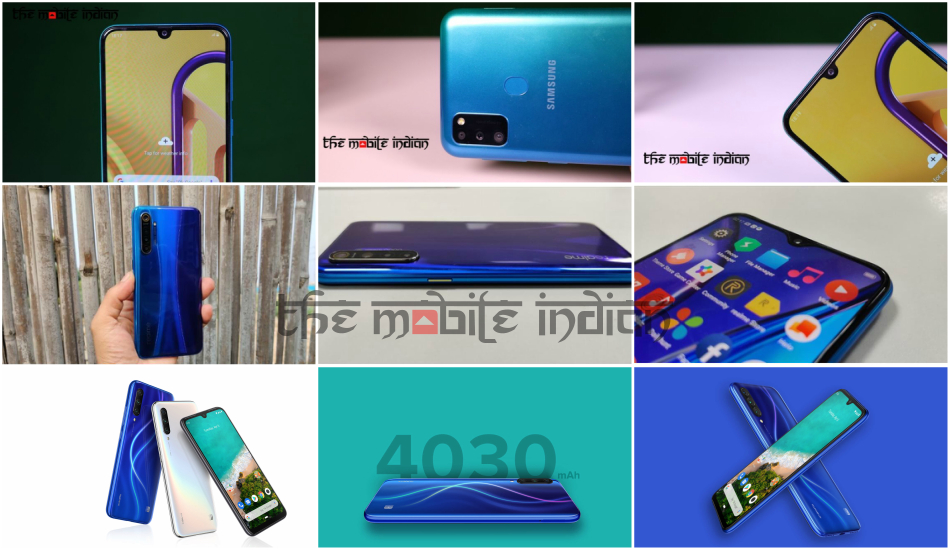 The Mi A3 features a 4,030mAh battery while the Realme XT gets its juices from a 4,000mAh power unit. It’s the Galaxy M30s which outdoes the there two as it equips a 6,000mAh battery. With a battery of that magnitude, expect more than two days of backup on moderate use.

However, the same can’t be said about fast charging as the M30s comes bundled with a standard 15W adapter. The Mi A3 offers a slightly faster 18W charging but the Realme XT is the one to support 20W VOOC Flash Charge 3.0 technology.

Samsung’s latest mid-range offering, the Galaxy M30s packs a lot of surprises that you might expect from the likes of Xiaomi and Realme. The device offers better performance than on a Snapdragon 712-powered phone, a durable design, a full-screen AMOLED display, a smooth UI and a larger-than-usual 6000mAh battery unit.

If your budget was perhaps slightly lower, you can opt for the Mi A3 which offers the same camera features with mid-range performance and Pure Android experience. As a higher-priced alternative, the Realme XT will be ideal for those expecting a better camera on a smartphone, premium looks and a solid battery with 20W fast charging.