Samsung is gearing to launch a new Galaxy 'M' series with three smartphones in January 2019.

Samsung is working on Galaxy M series of smartphones – Galaxy M10, M20, and M30. Now out of them, Samsung Galaxy M30 has been spotted on GeekBench benchmarking website. The M series is expected to replace the current Galaxy J, Galaxy On, and Galaxy C series devices.

As per the GeekBench listing via NashVilleChatterClass, the Samsung Galaxy M30 with the model number SM-M305F will be powered by Exynos 7885 SoC along with 4GB of RAM. In the single-core and multi-core benchmarking tests of Geekbench, the SM-M305F Galaxy M30 has scored 1327 and 4197 points respectively. 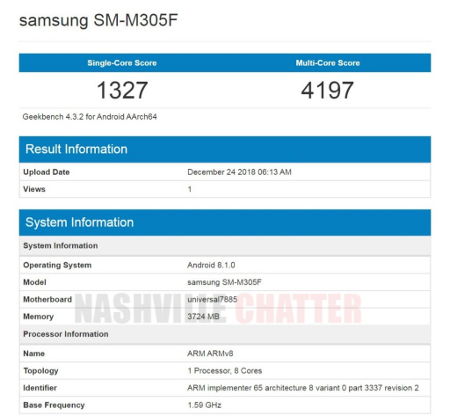 On the software font, the phone will be running Android 8.1 Oreo operating system, despite the Android 9.0 Pie roll out. From earlier reports, we also know that the Galaxy M30 may come with 64GB and 128GB of internal storage options.

Meanwhile, in a new development, Samsung is gearing to launch a new Galaxy ‘M’ series with three smartphones in January 2019.

Reliable industry sources told IANS on Wednesday that the India launch will mark the global debut of Galaxy ‘M’ series. According to the dealers, the “world’s first” new smartphone series is being launched with industry-first features.